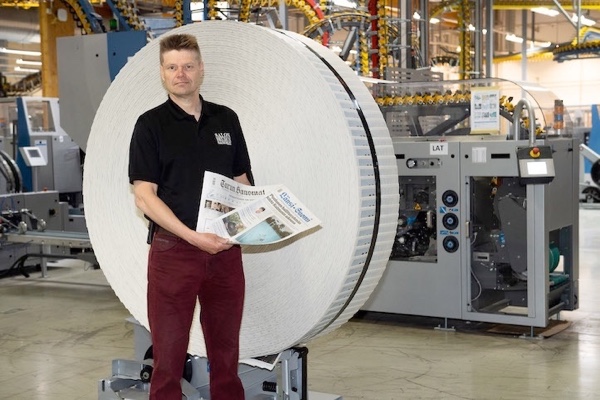 Friday 14. August 2020 - A well-thought-out expansion of finishing activities in Salo has allowed the Finnish media group TS-Yhtymä to consolidate its two newspaper printing plants. Ferags mailroom concept not only brings a great deal of flexibility, but also allows the customer to efficiently produce numerous regional newspapers with their sometimes very small circulations.

Among others, the Finnish media group TS-Yhtymä publishes the daily newspapers Turun Sanomat in Turku in south-west Finland and Salon Seudun Sanomat in Salo, a town located 60 kilometres away. Until recently, the group operated newspaper printing plants in both towns. However, the future of the Turku site had already been under discussion for quite a while – not least due to the printing press there dating back to 1978. For a long time, things took their usual course – in other words, with the goal of investing in a more modern printing press.
However, following discussions with Ferag another solution was eventually favoured, which is primarily based on a flexible mailroom concept with added production capacities and intermediate buffer possibilities. As a result, the printing plant in Turku was closed over Easter 2020 and the entire printing portfolio moved to Salo, where the finishing facilities were modified and expanded significantly between autumn 2019 and spring 2020.
Switchover to offline finishing
From November, machine modules from the two existing mailrooms were combined optimally in Salo and the different generations of control systems coordinated by Ferag. While there was already a Ferag inserting drum installed in Salo – although it was only used to a limited extent – the entire production process in finishing is now carried out offline. To do this, Ferag delivered a second RollSertDrum inserting drum, several MultiDisc unwinding stations for the automatic assignment of preprints and main products, and a second RollStream line with JetFeeder feeders.
As a result, the Koenig & Bauer Continent – installed in 1998 and completely overhauled following a serious fire in 2007 – remains the sole press in operation in Salo. With this single-width press line with single plate cylinder circumference, the eight towers can print either 32 broadsheet or 64 tabloid pages in Nordisch format. However, thanks to the two folders, two products can also be manufactured in parallel with a maximum of 16 or 32 (half-format) pages each.
Turun Sanomat is the most important daily newspaper in the south-west of Finland, and is printed seven days a week in print runs of up to 70,000 copies. It consists of two sections – the first of which is printed at 6 p.m. and the second at 9 p.m. If a C-section is required, this is printed as an additional preprint during the day shift. However, this means that the B-section or C-section is fed via the two RSD inserting drums. The RollStream precollecting lines are used for occasional advertising supplements.
Many set-up procedures
In addition to the nine in-house titles, the “Lehtitehdas” (newspaper factory) in Salo with its 50 staff now also handles numerous commercial print jobs seven days a week. Thanks to the good transport links between Salo and Turku, there were also no logistical obstacles to the consolidation of the printing plants in one site.
According to plant manager Milko Warinowski, he and his team currently deal with around 80 basic set-up procedures each week on the Continent press. The print runs – Turun Sanomat excepted – range from 5000 to 20,000 copies, mostly in tabloid format and stitched using the installed ribbon stitchers.
What catches the eye in the mailroom in Salo are the numerous Ferag MultiStack compensating stackers on show – with ten installed here in total. These are necessary for producing the numerous odd bundles – often with only three or four copies per bundle. This is due to the readership being spread far and wide over the country and its many islands. Many copies of newspapers from south-west Finland are also delivered across the country as owners of holiday homes in the region want to receive the local newspaper all year round.