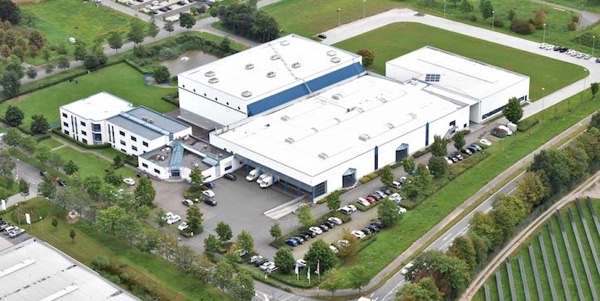 Linus Wittich Media Group is a family-owned company based in Höhr-Grenzhausen in Germany’s Westerwald region. It operates at a total of 14 locations across Germany and Austria and publishes around 900 local newspapers. 650 are weeklies, their circulation adding up to five million copies. The final format of most is DIN A4, with a few titles produced in DIN A3.
In addition to the Föhren printing plant, the Group operates two others located at Herbstein in the state of Hesse and Herzberg in the state of Brandenburg. Together they cover a large distribution area, since Wittich is active in almost all the German federal states. The three locations are mostly kept busy producing the Group’s own newspaper titles: every week around 200 of them ship out from Föhren alone. All that is accomplished by 90 or so employees working here five days a week, with double shifts from Monday to Thursday.
The three printing plants are also in the print service provider market, producing brochures, inserts and newspapers in A4 and A3 formats for various customers. On top of this is an online shop, www.lw-flyerdruck.de, which has been catering to that market with great success since 2012.
Trimming enhances perceived product value
Items that first rolled off a Rotaprint 40 in the 1960s are meanwhile produced on Manroland Cromoman web offset presses, with several of them at each of the three printing locations. The ten single-width eight-couple towers in Föhren are arranged in two lines each capable of outputting up to 80 A4 pages in one print pass. The machines are equipped with a total of three folder deliveries, almost always used in parallel.
Some two years ago, Linus Wittich Media Group decided on an across-the-board facelift for its publications by introducing three-sided trim to lend its local newspapers a magazine-like look and feel. This move saw the first Ferag trimming drums installed behind two folder deliveries, those already being supplied and evacuated by universal conveyor (UTR) paced conveyor chains. Also served via UTR are the Ferag MultiStack compensating stackers that collate newspapers into neat and handy bundles of 40 to 200 copies, depending on product page count. In summer 2019 the third folder delivery also gained a Ferag processing line consisting of a UTR and MultiStack compensating stackers. This one is overwhelmingly dedicated to products made up of just a few pages.
After all, newspaper page counts and print runs are both highly variable, starting at four A3 pages / eight A4 pages and peaking out at 160 A4 pages, while print runs start at 200 to 300 copies and in exceptional cases may even exceed 100,000 copies. All newspapers have their spines glued already in the printing press.
UTR enables changes in material flow
Such a portfolio breadth puts elaborate demands on logistics at Wittich’s printing plants. Items containing more than 80 A4 pages, for example, need routing to an offline gatherer-stitcher. The same applies when inserts are introduced on a separate production line.
Whereas newspaper stacks previously travelled along a floor standing conveyor, UTR conveyor chains have now cleared a path to reorganizing material flow and production processes. They also represent an important step towards automating currently manual production stages. Thus, downstream of the MultiStack compensating stacker in Föhren, large print runs and page-heavy products are now transferred directly to a layer palletizer. Small final formats may be challenging, yet the high-grade bundles coming out of the MTS make this possible.
Frank Trossen, an Executive Board member at Druckhaus Wittich KG, rates the supply partner experience with Ferag as “very good.” He praises in particular the “absolute reliability and commitment” that are so crucial to mid-sized enterprises such as Wittich. He has similar sentiments about the MultiStack compensating stackers, which replaced a competitor’s machinery that was designed more for job printing – those impressed Druckhaus Wittich “from day one of production”.