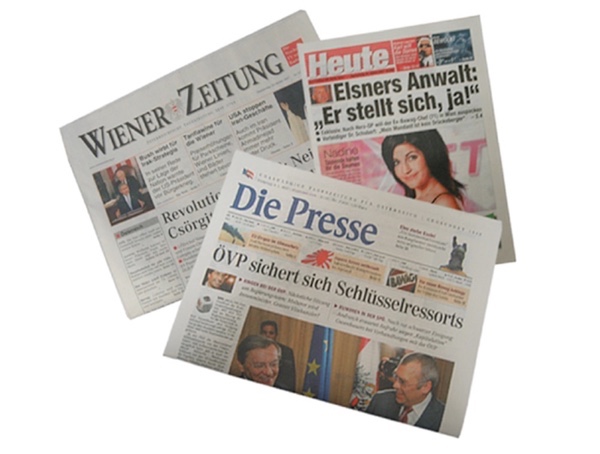 Thursday 12. March 2020 - Herold Druck und Verlag GmbH in Vienna (Austria) has optimized its mailroom lines with an investment in two additional Ferag MultiStack compensating stackers. Having four compensating stackers lined up in a row now makes it possible to distribute several productions between them in whichever way is optimal for bundle formation.

Herold has been printing newspapers for over 125 years, starting in 1893 with production of Reichspost, the first daily to be distributed across the whole Danube Monarchy. After becoming part of the Dr. Taus industrial group in the 1990s, Herold Druck und Verlag embarked on “an increasingly dynamic and innovative track”. And as a pure contract printer, Herold always keeps in mind the quality that customers expect. “This is what underlies our business decisions,” states Managing Director Thomas Unterberger.
Herold currently has production running seven days a week. The focus is on three interregional daily newspapers, plus around 50 weekly and monthly titles. At the company’s printing plant located at the southern edge of Vienna’s city centre district, Herold prints the daily Die Presse as well as Wiener Zeitung (the world’s oldest daily newspaper) and the Vienna partial edition of Heute, the most successful free daily newspaper in Austria.
Herold Druck is currently among the most innovative companies in Austria specializing in the production of coldset newspapers and semi-commercials – with highly capable prepress, printing and postpress all the way through to postal dispatch. Via its subsidiaries, Herold is also one of the largest sheet-fed offset printers and bookbinderies in Austria.
Repeated investments
Herold invested in a new printing press in 1993 and again in 2002, this time with re-equipment of the mailroom as well. The most recent newspaper press was moved to the site on Faradaygasse in 2012, at which point Herold also invested in the latest Ferag mailroom technology.
For inserting, an MSD-M 2:1 ECB inserting drum was chosen eight years ago. This can be used in combination with a RollStream precollecting system for regionalization of short runs. In 2:1 mode, for example, Herold processes 75,000 copies per hour via an inserting drum and is thus capable of handling even large print runs and inserts within tight time windows
Flexible compensating stacker arrangement
One inserting drum dating back to the 2002 investment project is still in operation. Until as recently as last year, this production line was also using two Ferag stacking systems for bundle formation – forerunners of the MultiStack compensating stacker line introduced later. What prompted the Herold management to take a further investment step was not only the obsolescence of this “ABL” technology and the difficulty of obtaining spare parts for it, but also complicated in-plant transport routes that had arisen over the years.
So in the summer of 2019, the existing configuration of two MultiStack compensating stackers was supplemented by another two identical systems. The universal conveyor chains leading from the printing presses or the precollecting lines now feed into a matrix that allows any assignment of incoming products to the four compensating stackers. This allows optimized processing speeds for individual orders. Even with odd bundles, there is still the option to use several stackers.
Since the two bundle-forming lines were previously very far apart, a great deal of manpower was required for pallet transport. It was also not so easy to switch orders between the two lines. All that has now changed, with production on both mailroom lines being run from a central control station with the aid of Navigator software.
Challenges
One challenge for the Ferag team was to optimize the universal conveyor routes. But above all, installation of the new stackers and conversion of the mailroom technology had to be accomplished in parallel with daily production. The only time test runs could take place was during Saturday and Sunday day shifts. With all now said and done, Thomas Unterberger, Managing Director of Herold Druck und Verlag GmbH, is very satisfied with the investment and the project execution. Personnel savings in particular help to shorten the ROI.