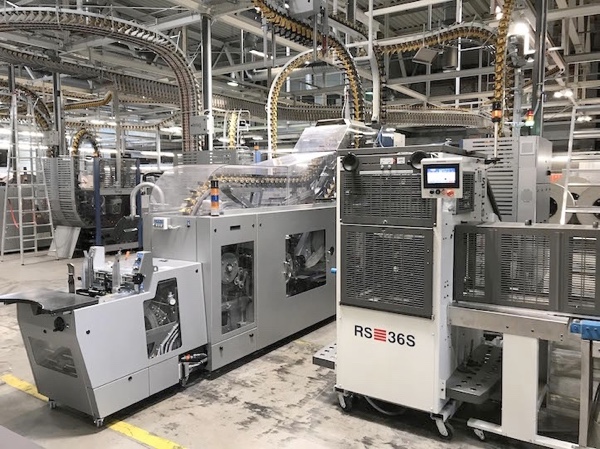 Monday 26. August 2019 - Ferag technology first arrived at the Mannheimer Morgen Großdruckerei und Verlag GmbH mailroom in 2018. The fact that Ferag prevailed against its competitors in the selection procedure mainly comes down to innovative concepts such as the FlyStream collating system. And to performance: the printing company can now handle the same number of products with two mailroom lines as it did before using three.

The Mannheimer Morgen printing plant is a classical example of German regional newspaper production, in this case around 130,000 dailies including those of a third-party publisher, with 16 individual editions of varying size, spread across six nights a week. Around mid-week and on weekends there are also print runs of freesheets running into the high six figures. The company last invested in a new printing press in 2009/2010.
The predecessor mailroom technology dated from 1996 and had seen well over 40,000 operating hours. So back in 2017, business and technical management at Mannheimer Morgen started deciding on a postpress processing concept for the future.
Twelve hoppers instead of five
The printing plant in Mannheim operates with three shifts from Tuesday to Friday and is very well utilized. So it became a problem that there were increasingly frequent breakdowns, while more and more subsections of the control system were being discontinued. Recent years had also seen a sharp increase in the quantity of inserts for freesheets in particular, so five insert hoppers per line were no longer enough.
Retrofit concepts were indeed also discussed in Mannheim, but the final decision was in favour of new Ferag technology. Two collating and inserting lines are now the centrepiece of the new mailroom: one configuration comprises a RollSertDrum (RSD) inserting drum, a FlyStream with twelve manually loaded JetFeeder hoppers, and three MultiDisc unwinding stations for automatic feeding of the main product and preprints. The second line brings together an EasySert inserting drum and a FlyStream with eight JetFeeders, plus three MultiDisc unwinding stations. The RSD/FlyStream combination is dimensioned for a maximum processing speed of 36,000 copies per hour, while the EasySert line can complete up to 30,000 newspapers. Thus equipped, the duo is accomplishing what Mannheimer Morgen previously handled with three lines.
But it is not just mechanical speed that now enables the printing house to achieve significantly better throughput. The team under production manager Guido Moch has as many as twelve hoppers at its disposal, which makes them better able to prepare for edition changes because not every one is always tied up for a given run. In addition, voluminous inserts can be split between two hoppers. Guido Moch and Hermann Scheuerer, who is technical manager of the printing company, were particularly impressed by FlyStream’s technological principle. This allows placing difficult-to-process inserts in the middle of the collation and then inserting the whole bundle into the main product in a reliable, single step.
Hermann Scheuerer also finds the Ferag Universal Conveyor’s ability to hold two products in one gripper very helpful, as this halves the chain speed and thus significantly reduces noise level in the mailroom.
Production generally offline
In order to decouple printing from postpress and make optimum use of possibilities offered by the technology at each stage, the Mannheimer Morgen mailroom in general works offline. The main product with a maximum of 32 pages is printed overnight, while other newspaper elements are printed beforehand and temporarily stored on the MultiDisc for later feeding as preprints to the FlyStream.
Finished newspapers are bundled using a total of four Ferag MultiStack compensating stackers. For subsequent cross strapping and bundle dispatch, the existing technology was overhauled so it could continue to be used.
Due to space considerations, conversion from the predecessor to new Ferag technology took place in several stages, from the beginning of April until the end of November 2018. After one of the three previous inserting lines was dismantled, Mannheimer Morgen had to get by for a few weeks with earlier editorial deadlines and narrower delivery windows for distribution. The commissioning phases mattered particularly to this new Ferag customer: before any further dismantling of the old machinery, the plan was always to have a two-week period of parallel production – safety first.
But as it turned out, the switch to Ferag went without any particular difficulties. Mannheimer Morgen technical manager Hermann Scheuerer: “Of course, technology has moved on significantly in 22 years; it will take some time getting used to.” According to Guido Moch the team became “immediate fans” of the Ferag compensating stacker, but other technical modules also gained rapid acceptance – including the control by Navigator. To ease familiarization, a few employees were given the opportunity to work “live” with another Ferag user for a week.
“Extremely satisfied” with the new technology
More than six months on, Hermann Scheuerer and Guido Moch both draw a positive conclusion. “By and large extremely satisfied” is their verdict. The new technology has improved throughput by 10 to 20 percent, and the FlyStream technology has made insert handling much easier.