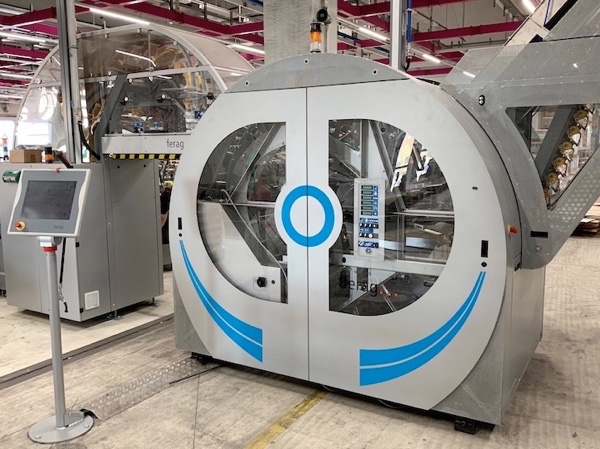 Friday 25. October 2019 - MZ Druckereigesellschaft in Halle an der Saale (Saxony-AnhaltGermany) is an active player in the consolidation of newspaper printing in Germany. The subsidiary of DuMont Druck GmbH & Co. KG invested in completely new printing and mailroom technology three years ago. Now in 2019, capacities were more than doubled to cover future production of daily newspapers and freesheets for the Leipzig area. MZ Druckereigesellschaft has once again trusted in efficient Ferag mailroom technology.

In 2016 MZ Druckereigesellschaft made a big leap in postpress processing: the mailroom was automated and regionalized inserting was organized very efficiently using Navigator visualization and control software, with Optimizer for data optimization. There were investments in MultiDisc winding and unwinding systems, a dynamic DiscPool, two RollSertDrum inserting drums and the FlyStream precollecting systems each with 19 JetFeeder hoppers (since expanded to 21), as well as six MultiStack compensating stackers with inline topsheet printing and UTR conveyor technology.
The benefits were felt equally by the Mitteldeutsche Zeitung, the main product published six days a week in 17 regional editions, and by the Wochenspiegel and Super Sonntag freesheets that likewise appear in various regional editions. In short: since 2016 MZ Druckereigesellschaft could gain extensive experience with how to optimally manage and process large volumes of inserts using the latest Ferag technology.
Production capacity more than doubled
Thus MZ Druckereigesellschaft was well-poised for scaling these experiences after winning the order to produce the Leipziger Volkszeitung as well as the SachsenSonntag and Leipziger Rundschau freesheets some months previously. This meant printing capacity would need to grow and mailroom capacity more than double.
Equipment supplied by Ferag included two very high performance inserting systems: one RollSertDrum and one EasySert, each with a FlyStream collating line having 29 JetFeeder hoppers. In addition, there is a MultiDisc pool and several unwinding stations as well as six MultiStack compensating stackers. In result, the mailroom has grown to four inserting lines with around one hundred hoppers.
Between 125,000 and 150,000 copies of the Leipziger Volkszeitung alone are processed every night from Monday to Saturday, with the two freesheets accounting for 490,000 copies each. Impressive quantities of inserts for both the Leipzig and Halle titles are to be processed next year: Waldemar Geuthner, project manager at MZ Druckereigesellschaft, anticipates conveying and inserting a total of around 1.3 billion inserts annually. To cope with the logistics involved, a separate insert warehouse with 1,600 square metres of floor space and 1,450 storage bays in pallet racks is currently under construction adjacent to the mailroom complex, and will link to it through a connecting corridor.
Automated production
MZ Druckereigesellschaft has high hopes for the EasySert line, which is now also capable of speeds up to 30,000 insert collations per hour. The user operates the EasySert line offline and supplies it either manually via JetFeeder or automatically via a MultiDisc unwinding station. On Fridays and the small hours of Saturday alone, a quarter of a million SachsenSonntag freesheets will be processed here. Playing a major role in the high speed and thus processing efficiency is a link-up between VIP Mail distribution software from Modular Software Solutions GmbH and Ferag’s Navigator planning and control tool. This ensures automatic targeting of the JetFeeder hoppers to minimize pauses in production during version changes.
The RollSertDrum inserting line began operation in Halle at the end of May and has been producing SachsenSonntag for the Leipzig customer since late summer. When the new press starts rolling in October, the universal conveyor can also be connected to the MultiDisc pool. From early November the Leipziger Volkszeitung will ship entirely from MZ Druckhaus, to be followed just a few days later by the Leipziger Rundschau freesheet. That will be external evidence of yet more great teamwork among staff at MZ Druckereigesellschaft as well as Ferag. Waldemar Geuthner is “most satisfied” with the Ferag technicians: “It’s all going very smoothly and hand-in-hand.”