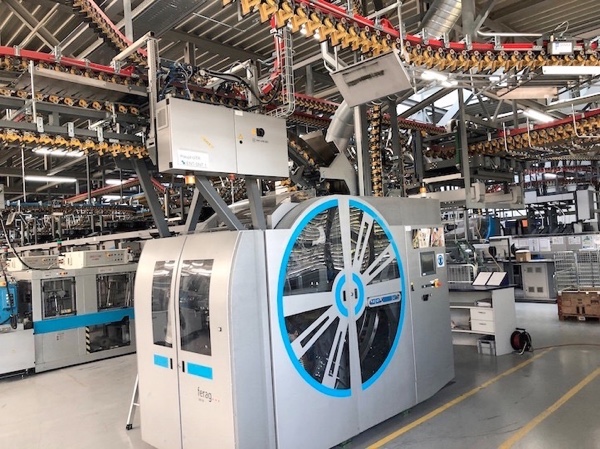 Monday 30. September 2019 - In 2019, NZZ Media Services AG - one of the newspaper printing plants of CH Media - was equipped with mailroom technology from Ferag for the first time. This was made possible by relocating the available technology in-house from Adligenswil to St. Gallen.

There have been a series of structural adjustments at NZZ-Regionalmedien and its printing plants in recent years, with the site in St. Gallen-Winkeln in Eastern Switzerland taking on an increasingly prominent role. With its 80 members of staff, the printing plant here above all currently produces the St. Galler Tagblatt with four local editions and a circulation of around 115,000 copies, the Schaffhauser Nachrichten and several smaller, local titles six nights a week. To meet these requirements, Tagblatt Print has two Wifag OF 470 printing presses in operation that can each produce 48 pages in broadsheet format or 96 pages in tabloid format.
The in-house printing plant in Adligenswil closed at the end of 2018, and the majority of the daily orders could be transferred to St. Gallen. Additionally, the plant was also tasked with printing a partial edition of the Coopzeitung. This order not only demands precisely defined print capacities, but also the possibility of trimming this tabloid product. This was one of the reasons why new mailroom technology with inline trimming was installed at the printing plant in St. Gallen in 2019.
The former equipment from another manufacturer was put into operation when the printing plant was newly built back in 2002. With the closure of the plant in Adligenswil, two complete Ferag mailroom lines became available. These were then dismounted in Adligenswil and reinstalled in St. Gallen within six months between December 2018 and May 2019.
The decision by NZZ Media Services to take this step – and the extent of the necessary retrofitting of the individual modules – was made so early that an evaluation of the technical condition could already be made during the final weeks of production in Lucerne. Moreover, it was also possible to carry out some of the retrofitting steps before dismounting began in Adligenswil.
Technology replaced in eight steps over a period of six months
As Michael Fingerhuth, Managing Director of Newspaper Printing at CH Media, observed, the changeover to Ferag mailroom technology in St. Gallen “resembled open-heart surgery”. In eight steps, the two existing mailroom lines were dismounted while the Ferag technology was simultaneously installed and put into operation – and all while production still had to be taken care of in full. It was only possible to extend the overnight production times by half an hour per night for a few weeks.
Fortunately, there was so much space available that it was possible to initially set up one of the MSD-2C inserting drums with RollStream precollecting line and six JetFeeder hoppers. However, a connection was not made to the automated winding machinery, meaning insertion had to be carried out by hand for several weeks. In the next step, an existing mailroom line was then completely replaced. Only when the second existing line was also dismounted and the Ferag technology was completely installed was the printing plant able to work again at full capacity with all the available technology.
In addition to the two inserting lines – each consisting of one MultiSertDrum, RollStream and four MultiDisc tandem winding and unwinding stations each, plus three MultiStack stack turners – the SNT-50 trimming drum is at the heart of the system. It is an essential part of daily production for the Coop order and must be able to process products of up to 160 pages. Migros is also a customer at NZZ Media Services, with the printing plant producing the partial edition of the customer magazine for Eastern Switzerland for the past two years. Therefore, all bundling lines at the printing plant are equipped with a log stacking unit. The six MultiStack stack turners can be freely allocated to a line depending on the order structure.
Higher speeds possible
As Michael Fingerhuth discovered, the changeover to Ferag technology was quite a challenge for the staff at the printing plant, but one that they were able to master with consummate professionalism and with the support of the commissioning team at Ferag. NZZ Media Services can now benefit from the added flexibility and, above all, the higher speed offered by the Ferag mailroom technology.