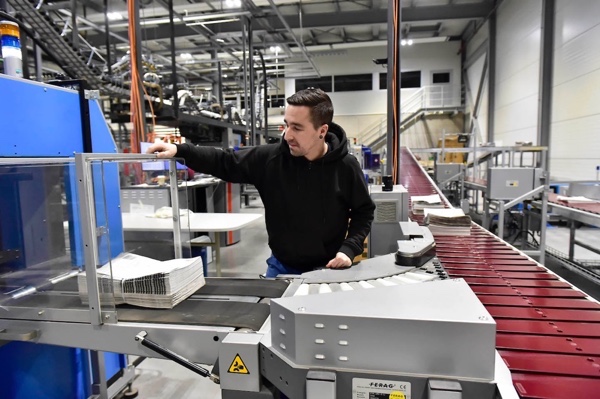 Thursday 13. June 2019 - Last year, the Rhne Media group from Western Switzerland built a new printing centre in Monthey (canton of Valais). The daily newspaper Le Nouvelliste and other titles from ESH Médias, such as LArcInfo and La Cte, are now being produced here. Ferag played an active role in helping Rhne Media relocate the mailroom technology to Monthey from Mulhouse and Woippy in France.

Rhône Media is the Valais business unit of ESH Médias, a Swiss media group which is active in the regional press as well as in many digital activities and in e-commerce. With regional daily newspapers and online and mobile versions, the company is firmly established in the French-speaking media market. ESH Médias also publishes weekly and monthly regional newspapers. The main titles here are Le Nouvelliste, L’ArcInfo, Le Quotidien de La Côte, L’Arc Hebdo, Le Journal de Cossonay, Le Journal de Sierre and La Gazette de Martigny. The group’s digital activities include jobeo.ch, realdeals.ch, La Clé, WINTERPASS, Le Mini-guide, Oh!Box, Oh!Pass and digitaldynamix.ch.
New site in an ideal location
The new printing centre was put into operation as planned on 1 January 2019. Monthey was chosen here due to the topography of the Valais region, and is an ideal location for distributing newspapers across the entire circulation area.
With this project, ESH Médias wants to show its commitment towards investing in paper-based media in addition to digital platforms. According to the group, the complementary nature of the two channels (paper and digital) for providing high-quality information is an important part of the editorial strategy at ESH Médias for all its news media. ESH Médias was also looking to move to a location as close as possible to the centre of Western Switzerland.
Gaining new customers
In addition to printing its own newspapers, the group also wants to acquire new customers for the printing centre. The operating facility has a floor space of 6000 square metres and is now equipped with two 48-page machines, each of which can print 90,000 copies per hour in total.
The new printing centre project actually started back in 2015. As Technical Director of Rhône Media, Thierry Dufrenne, explains, the company then had the opportunity of purchasing a printing press from NZZ “for a very good price”. The Wifag 471 Evolution, which was built in 2005, had only been used very little up to then. Until the anticipated decision to invest was made by majority shareholder Philippe Hersant, Rhône Media initially stored the press in Sion.
The final decision to build the printing centre in Monthey was made in June 2017. However, at that time it was not yet clear as to which mailroom technology would be available, and when. One month after construction of the new printing centre got under way in September 2017, another good opportunity arose regarding the postpress processing. This time around, it was possible to acquire proven Ferag technology from two newspaper printing plants in Woippy (near Metz) and Mulhouse in the Alsace region. Everyone involved was pressed for time as the start of production for all ESH Médias titles at the new printing centre was planned for 1 January 2019, with partial operation consequently starting some weeks earlier.
Ferag was thus tasked by Rhône Media with adapting the two mailroom lines according to requirements in Monthey, refurbishing them and then installing them on site at the new printing centre in Western Switzerland.
Similar technical features
In principle, the two Ferag lines have the same technical features. However, they were built in different years, with the line from Woippy delivered and installed in 2008 and the line from Mulhouse in 2004.
Each line includes a UTR universal conveyor, several MultiDisc winding and unwinding stations (four and five, respectively), with one MSD-M inserting drum each, one RollStream line with two JetFeeder hoppers (with the possibility of expansion), and three MultiStack compensating stackers. Once installed, it is then possible to shrink-wrap and strap the packages. A PKT bundle dispatch line links the two mailroom lines with the nine covered loading docks. In total, the installation includes 864 metres of cycled conveyor chains with 8640 grippers.
With the start of production planned for November 2018, the assembly line from Metz was put into operation first at the start of July 2018. This was followed by assembly of the line from Mulhouse, which commenced in October 2018 and was completed in May 2019.
Thierry Dufrenne: “I remain absolutely convinced that we would never have made these deadlines without the expertise provided by Ferag. It goes without saying that we are very happy with Ferag’s contribution to the entire project.”
An extremely positive aspect for Valais as a business location is the announcement by ESH Médias that the new project will not ultimately cause any job losses. In fact, the aim is instead to increase the workforce following the acquisition of new customers. “With this investment, our group provides 35 secure jobs in the Valais region in a field of business where there aren’t many other opportunities on offer,” commented General Director at Groupe Rhône Media, Eric Meizoz, in a media release.