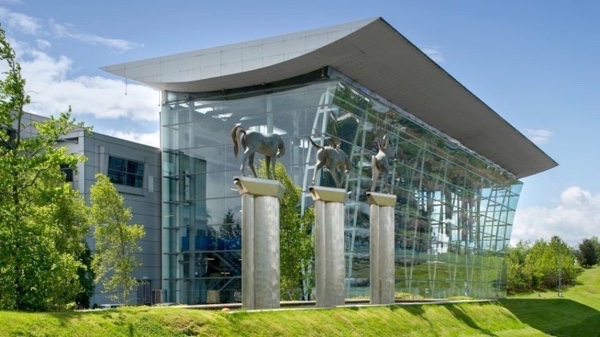 The investment was made from both a cost and quality perspective. Previous positive experiences with QIPC’s proven optical measuring and control systems at a different facility also contributed to Webprint Concepts Limited’s decision to choose QIPC again.
The Dublin facility is a relatively new printing location for Webprint. Just last March they took over the former Independent News and Media (INM) print plant at Citywest on the outskirts of Dublin. In order to expand business as intended, the printing presses needed to be upgraded. “Investing in press automation is mainly driven by costs, but quality is also a big factor,” said Donagh O’Doherty, managing director of Webprint. “Given the significant rise in newsprint prices, the saving on start-up waste is more important than ever,” he said. “In addition, there should be more time for printers to maintain the press with this automation in place.”
To control colour and register on all 8 printing units of the manroland GEOMAN press, QIPC’s IDS-3D will be installed. IDS-3D will also control additional functionalities like damp and smart ink- and damp presetting. Cut-off and side-lay ribbon control will be handled by the mRC-3D cameras. “We have been using QIPC’s press automation in our Cork plant as part of the KBA installation in 2006,” said Donagh O’Doherty. “Given these experiences, we know that with this kind of automation we can fulfil the aim that our newspaper printing and web offset printing techniques are the best in the market.”
“As said earlier, cost saving is more important than ever. Supported by QIPC’s full automation package, we will be able to reduce waste to a minimum, see reduction of ink and indeed there may be manning-saving opportunities down the line. On the other hand, the quality will become more consistent, which will increase customer confidence and satisfaction and generate more revenue. In short, we expect a lot of both the people of QIPC and its automation,” he concludes.
Erwin van Rossem, director of global sales & marketing of QIPC, is thrilled with being awarded this prestigious order. “Webprint has done extensive research and compared the various options that the marketplace offers. After multiple site visits and in-depth analyses, they selected us to be their automation partner. Great to have our first reference on Irish soil.”
Webprint (Adenium Limited) is a privately owned and operated printing company, in production at Mahon, Cork, Ireland, since 2006 and Citywest, Dublin, since 2021. It is the largest independent cold-set web offset printer on the island of Ireland. While originally founded as a contract national and regional newspaper printer, they now also offer print management and distribution for a wide range of commercial and newspaper clients in Ireland and Britain. Since 2009, they have built up an extensive portfolio of commercial products and clients. They provide compelling solutions for customers looking for print runs from 1,000 to 1.5 million copies. They have received numerous print quality, management systems and environmental awards and nominations.

Mainpost is convinced by the press automation results of Q.I. Press Controls