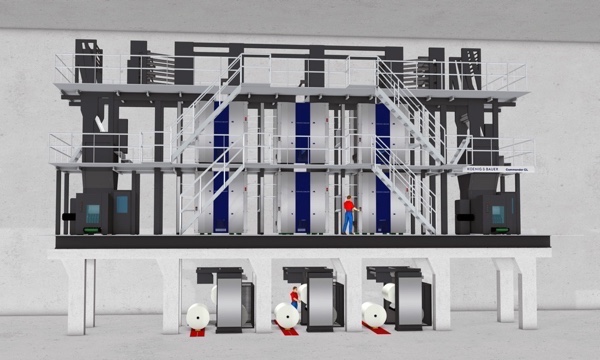 Monday 18. March 2019 - German printer WE-Druck invested in a new Koenig & Bauer press at the end of 2018. When the press will be put into operation in the summer of 2019, the Q.I. Press Controls (QIPC) automation systems will provide it with the most modern measuring and control equipment.

Partnership Koenig & Bauer
QIPC supplies high-quality optical measuring and control equipment for the printing industry. Systems that are used all over the world to further automate presses and result in printed matter of the highest quality. For these reasons, press manufacturer Koenig & Bauer has entered into a partnership with QIPC and presses from the German manufacturer are often equipped with QIPC automation. This is also the case with the new Commander CL from Koenig & Bauer, which will be put into operation by WE-Druck, a printing company in Oldenburg.
Positive stories
The new press in Oldenburg is part of a modernisation of the print plant, which produces 1.5 million newspapers and 7 million other supplements per week, and is to become the heart of the print plant. “We have decided to equip our press with QIPC systems because this will further increase the degree of automation of our press”, says Margit Schweizer, responsible at WE-Druck. “The fact that the systems can be fully integrated into our new press and that QIPC is Koenig & Bauer’s standard supplier also plays an important role. We also heard many positive stories from other printers working with QIPC.
Most cost-efficient solution
The Commander CL from Koenig & Bauer will be equipped with the mRC-3D system (6 cameras) for colour register, the mRC-3D system (2x 6 cameras) for cut-off control and the IDS-3D system (6 cameras) for colour control. “Every printer is looking for the lowest cost per copy”, says Erwin van Rossem, head of sales of QIPC. “Especially when investing in a new press, it is important to keep production costs as low as possible. The higher the degree of automation of a press, the lower the costs per copy. In the long term, an investment in our colour register and colour control and cut-off control always pays off. This will enable the press to print faster, more efficiently and more accurately.