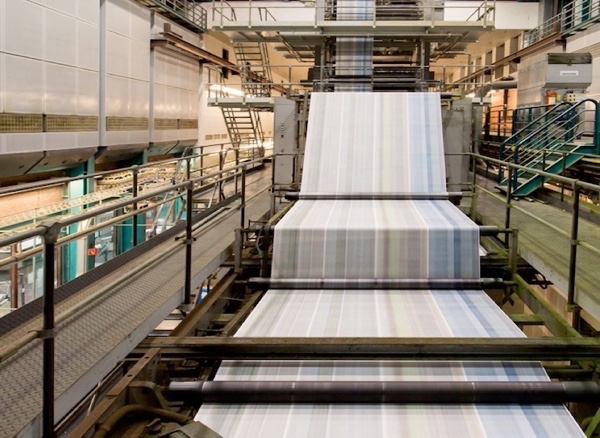 Monday 18. November 2019 - The press extension at the Telegraaf Media Groep (TMG) printing facility in Amsterdam is accompanied by an additional automation system from Q.I. Press Controls (QIPC). Now, the entire TMG printing facility remains equipped with the measurement and control systems of the Dutch specialist for the printing industry. In addition, QIPCs Smart Pre-setting software will be introduced on all production lines. This can result in considerable extra start-up savings.

Proven performance
TMG and QIPC have been partners for many years. The first QIPC automation installation was installed in 2005, after which the share was systematically increased. In the meantime, all presses in the printing facility in Amsterdam have been equipped with QIPC’s measurement and control systems. “A large part of our operations are automated”, says Jeroen Tamminga of Technical Support and Projects at TMG. “You can see that we work more efficiently than before. QIPC’s systems have been given the time to prove themselves to us.”
Uniformity in printing
And it’s not just that efficiency battle that led to QIPC still remaining TMG’s partner. “We can see, for example, that advertisements in our various titles correspond to each other much better,” explains Gerard Senator the manager of the printing company. The comprehensive automation has brought uniformity of the printed products. “This brought us a lot: you can see that there is a big difference compared to the past. We notice this in the decrease in comments or discussions with advertisers as well. They know that they can count on uniformity at our print facility.”
Uniformity in service
When TMG decided to further increase the capacity of the press by adding a 16th tower, it was natural to equip this additional web with QIPC measuring and control systems as well. “This is the best solution in terms of uniformity,” says Gerard Senator. “Our employees are familiar and satisfied with the QIPC automation.”
Smart Pre-setting / Partnership Program
Finally, TMG invested in Smart Pre-setting software, which will eventually be deployed in the entire print facility. In addition to the ink keys, Smart Pre-setting set up the dampening solution on the basis of “intelligent” self-learning software. “By pre-setting better, the colour control system will have to regulate less and thus achieve the right quality more quickly. Considerable savings in waste can then be made,” says QIPC’s Director of Global Sales & Marketing Erwin van Rossem. “We offer this functionality in our so-called “Partnership Program”. In this case, this means that TMG can use the functionality and analyse the results before purchasing. Based on previous experience, we can say that this could lead to additional savings of up to 50%.”