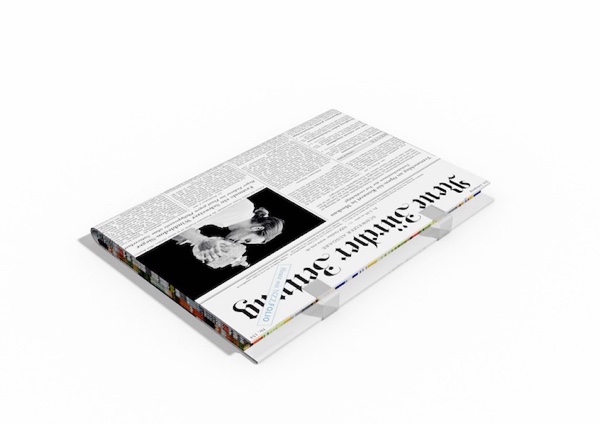 Friday 30. April 2021 - Foil is increasingly attracting criticism in public debate. With a further development of its Tapefix technology, Ferag AG now wants to offer an environmentally friendly alternative for sealing print products Climate neutrality and the conservation of fossil resources are increasingly taking centre stage in political debate and the resulting legal requirements.

With this in mind, major companies in the branch – such as postal companies, magazine publishers and distributors of direct advertising – are on the lookout for suitable alternatives.
Over the past few months, Ferag AG – a provider of innovative finishing technology for high-circulation print production – has been casting a critical eye on foil wrapping, which has been used for packaging print products for decades. This has led to a further development of Ferag’s Tapefix technology, which offers a reliable alternative to the foil wrapping of newspapers, magazines and booklets.
Foil wrapping is not only used for freesheets and newspapers, but also for packaging individual, high-quality periodicals. Additionally, preferred periodicals are wrapped in foil both at home and abroad, and bundled advertising supplements delivered to customers directly in plastic bags. In Germany, one of the most well-known examples of this is the “Einkauf aktuell” periodical delivered by Deutsche Post.
The approximate cost of the foil used is around €6.50 per 1000 copies, depending on the amount of advertising material to be wrapped.
Detachable adhesive strips
Tapefix from Ferag has proven a popular solution for several years now. Every week, millions of advertising supplements that have been collected via machine are then fastened and bundled with detachable adhesive strips using this technology.
Tapefix is currently undergoing further development at Ferag, with the goal of also offering the possibility of sealing on the open side – the cut-edge. This step is then made online at production speeds of up to 30,000 copies per hour. In the process, two custom-fit adhesive strips are fed in via a mobile device. The positioning of the strips can be adjusted according to the product. The product, which is suspended in the Ferag universal conveyor, is then sealed on the open side. Additional operating personnel are not necessary for the gluing module.
The product size can vary between 420 x 300 cm (approx. DIN A3) and 210 x 148 cm (DIN A5). Collections with a thickness of between 2 mm and 12 mm can be processed. The 19-mm-wide Tapefix adhesive tape is wound on reels measuring 8000 metres in length. A pallet with 48 reels (minimum quantity) is priced at €14,160. Assuming a tape length per copy of 2 x 40 mm, this results in material costs of €2.95 per 1000 copies – less than half the costs seen when using foil.
Smaller environmental footprint
The added value in economical terms not only comes from cutting material costs in half, but also in the need for fewer personnel during production and the significant increase in production speed. This is in addition to the smaller environmental footprint.
Tapefix technology uses a specially developed material made of natural fibre that can be removed without leaving residues. It is thus fully recyclable and can be composted or disposed of as waste paper. Ferag is also pushing for “Cradle to Cradle” certification for the Tapefix material.
On a socio-political level, foil wrapping is clearly not seen as an acceptable solution in many countries. As a result, the reputation of the packaging company suffers. The new technology not only avoids this, but also achieves a significant increase in quality.
Ferag is currently in discussions with numerous postal service providers, with their requirements all included in the development process. The start of the concept phase is planned for the second quarter of 2021 and Ferag is eagerly awaiting the feedback from potential users. The product should then be ready for the market at the end of 2021.