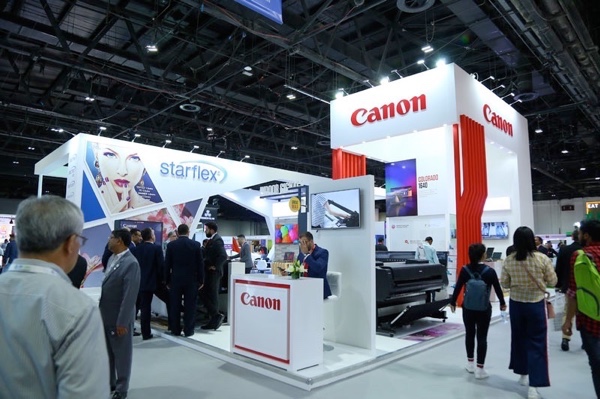 Tuesday 29. January 2019 - So much to see that the three days at the World Trade Center were barely enough for many visitors as several suppliers and manufacturers showcased their latest innovations

SGI Dubai 2019 show, the biggest and most comprehensive exhibition catering not only to the signage and textile printing markets in the region and beyond, is proud to announce another successful show conclusion.
Exhibitors from across the globe came to the World Trade Center in Dubai in order to cater to the print service providers in the region. MENA’s $35.1 billion printing and signage market attracts the best and latest innovations from suppliers and manufacturers. Nearly 200 million dirhams worth of machinery have been sold at the event.
A big draw during the exhibition was the unveiling of a poster that features the image of His Highness Sheikh Mohammed bin Rashid Al Maktoum, Vice President and Prime Minister of the UAE and Ruler of Dubai. Claimed to be one of the largest indoor banners in the world, this marvel of printing stands at 7 meters by 7 meters. The poster symbolises the industry’s gratitude towards the inspiring leader for completing 50 years in the service of the nation. The poster was created by the Epson team in Dubai in collaboration with the organisers of the show.
SGI Dubai exhibitor Canon for example has been putting innovation and creativity at the focus of its presentation. Together with its partners it showcased applications that help business to achieve new revenue streams. The company’s new imagePROGRAF series of large format printers for CAD and GIS as well as poster applications was on show. These printers feature the Lucia TD 5-colour water-resistent pigment inks featuring high surface tension and crisp lines and text.
Gold sponsor Blue Rhine launched two JHF printers – a roll-to-roll printer with 5 m width, and a hybrid 3.2m wide printer. In addition the company presented the Fujifilm MEJET flatbed printer and Acuity 1600 among others.
Lintec, Japanese manufacturer of printable window graphics, showcased vision control films and printable materials at their first time at SGI Dubai. Print service providers but also architects are thus able to realize creative applications that stand out from the rest.
Another quite popular topic has been augmented reality. Here, Oki and Epson as exhibitors stood out. The latest AR and VR equipment has been on show.

One week till SGI Dubai 2019 opens its doors

Applications and solutions for all at SGI Dubai 2019

SGI Dubai 2019 is primed to enable growth in print advertising