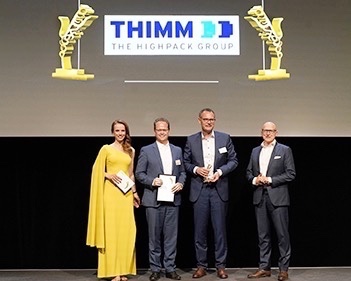 Friday 20. May 2022 - The competition organised by Deloitte Private, Credit Suisse, the Frankfurter Allgemeine Zeitung and the Federation of German Industries (BDI) is a seal of quality for successful medium-sized companies. The award ceremony took place on 12 May in Düsseldorf.

The family-owned company Thimm wins the Axia Best Managed Companies Award 2022, making it one of the most excellently managed companies in Germany for the third year in a row.
“We are very pleased to be among the winners of the Axia Best Managed Companies Award in 2022 as well,” says Kornelius Thimm, Managing Director Thimm Group. “We see this award as confirmation of our long-term corporate strategy and our entrepreneurial foresight. This award is also a distinction for our employees, who work every day with passion and know-how to find the best solution for our customers and thus contribute significantly to the success of our family business,” emphasises Thimm.
The Best Managed Companies programme is a competition and seal of quality for successful medium-sized companies organised by Deloitte Private, Credit Suisse, the Frankfurter Allgemeine Zeitung and the Federation of German Industries. The vision: to build a national and global ecosystem of excellently managed medium-sized companies. A key unique selling point of Best Managed Companies is its internationality: Best Managed Companies was launched by Deloitte in Canada in the 1990s and has since been successfully introduced in more than 40 countries.
“As a winner of the Best Managed Companies Award, Thimm has once again successfully demonstrated its outstanding corporate management. Thimm is thus not only a benchmark for the German SME sector, but at the same time stands for a strong as well as thoughtful economy in turbulent times,” explains Markus Seiz, Best Managed Company Programme Leader and Director at Deloitte Private. After a break of two years due to the pandemic, the festive award ceremony took place again as an event in Düsseldorf, where Holger Dunker and Kornelius Thimm accepted the award on behalf of the entire Thimm Group.
The winners of the award were previously evaluated and determined in a multi-stage application process based on the four award core areas of Strategy, Productivity and Innovation, Culture and Commitment as well as Governance and Finance. A company was only named Best Managed Company if it was able to demonstrate high performance in all four areas. The companies were evaluated by a jury of renowned representatives from business, academia and the media.

Thimm receives another award as an outstanding company