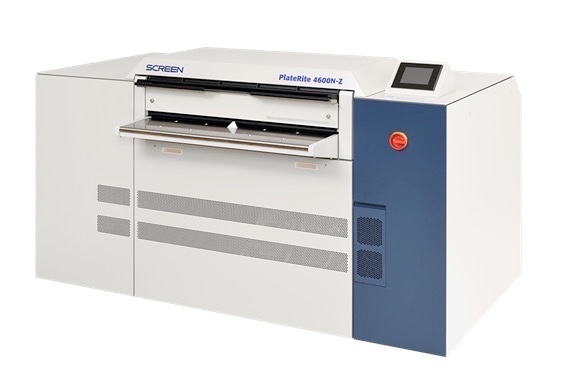 Tuesday 20. July 2021 - They are designed to image plates with four A4 pages and combine high throughput with excellent versatility and environmental performance. The models in this series are scheduled to be launched worldwide in July this year.

In recent years, there has been a growing demand from the printing industry for new CtP systems that, in addition to high productivity and quality, offer improved ease of use, lower operating costs and have an eco-friendly design to reduce environmental impact. In response to these market demands, SCREEN GA has developed the PlateRite 4600N series. It comprises three revised models of the company’s PlateRite 4600 series, which have performed impressively since their launch.
Each of the new systems continues to feature the same consistently high imaging speed, thanks to the highly regarded fibre optic laser diode imaging technology. Now supporting plates up to 830 x 680mm, they are compatible with a wider variety of presses.
The series includes the E, S and Z models, each designed to meet specific production requirements. The E model is equipped with 16-channel imaging heads and has a throughput of 11 plates per hour. The S model has 32-channel imaging heads and a throughput of 21 plates per hour.1 The top-of-the-line Z model in this series, equipped with 64-channel imaging heads, achieves an output of up to 33 plates per hour.
In addition, the E, S and Z models are compatible with SCREEN GA’s newly available single-cassette autoloader (SA-L). The SA-L4600N is far more user-friendly and can automatically feed up to 100 plates in one pass. With the new model, individual plates can also be fed at the junction between the autoloader and the CtP system, making it easy to integrate other plate types into ongoing production.
In addition to reducing operator workload, these new features also enable longer continuous output, which in turn translates into higher productivity and profitability. The traditional MA-L4600 multi-cassette autoloader can also be connected to all new CtP systems.
To reduce environmental impact, PlateRite 4600N Series models support a wide range of processless, chemical-free and waterless plates. They also offer major environmental benefits by reducing emissions of harmful volatile organic compounds and developer fluid waste, while maintaining excellent quality and high throughput.
The ability to select the appropriate printing process and plates for specific environments allows for highly flexible and efficient production line design. During production downtime, PlateRite 4600N Series models are switched to energy-saving mode to reduce power consumption. This reduces power consumption by a staggering 51%2 during operation and an equally impressive 46% in standby mode.2 For even greater reliability, SCREEN GA’s TRUST Network Service provides advanced online maintenance and monitoring of all PlateRite4600N Series models.
As a global leader in CtP, SCREEN GA is committed to developing and delivering products that meet market needs and will strengthen its carbon offset initiatives. The company hopes that its products and initiatives will play an important role in supporting the long-term growth of the printing industry.