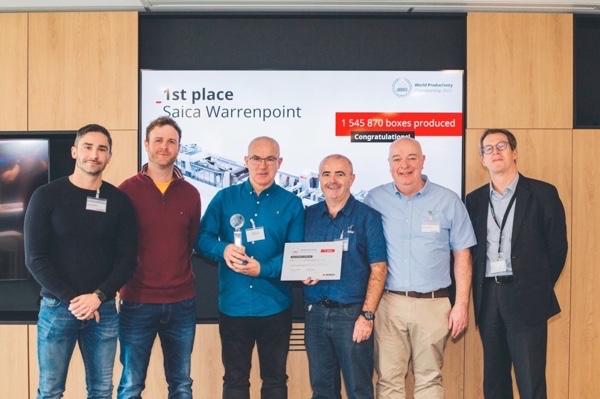 Monday 21. November 2022 - Following the announcement of the impressive results, Bobst Lyon opened its doors to celebrate the newly crowned winners of the 2022 Productivity World Championship for BOBST FFG 8.20 EXPERT and EXPERTLINE customers.

A VIP event held in October welcomed the champions to the Lyon site, where they were treated to a day of innovation and inspiration in addition to the official awards ceremony.
Companies from over 10 countries took part in the competition, which was held during the summer. Producing an amazing 1,545,870 units on their BOBST FFG 8.20 EXPERTLINE in the 96-hour period allotted, the Saica Pack Warrenpoint team from Northern Ireland took top prize winning a spare parts inventory worth €10,000. Zerhusen Katonagen from Germany was awarded silver, while the bronze went to French converter Seyfert Forez, with both having produced in excess of 1.3 million units.
The trip to Bobst Lyon was part of the prize given to the three winning companies. During the VIP event, they were taken on a factory tour to see manufacturing in action and hear more details of how BOBST is driving innovation in flexo printing and converting. This was complemented by a visit to the Competence Center where they saw the new BOBST MASTERDRO flexo rotary die-cutter, which is capable of inside-outside printing in a single pass. Passing through the Innovation Corridor at the center, the visitors could also experience the illustrated history of BOBST, as well as the evolution of the FFG and DRO product lines.
Later in the day, the winners sat down with BOBST for a roundtable discussion about their experience of participating in the productivity challenge, before the official awards ceremony, which was led by Emmanuel Roquet, Head of the FFG DRO product line. A guided tour to discover the beauty of Lyon old town and the bustling modern city center rounded off the event.
“The BOBST Productivity World Championship was very successful, and we were proud to welcome the winners, Saica Pack Warrenpoint, Zerhusen Katonagen and Seyfert Forez, here to Bobst Lyon to fully recognize their incredible achievements,” said David Arnaud, Product Marketing Director FFG DRO. “It is important to acknowledge the passion and dedication that our customers put into their businesses on a daily basis. Getting together face-to-face further strengthens our partnerships and helps us understand their needs better.”

Annual General Meeting of Bobst Group SA on 30 March 2022: approval of all proposals