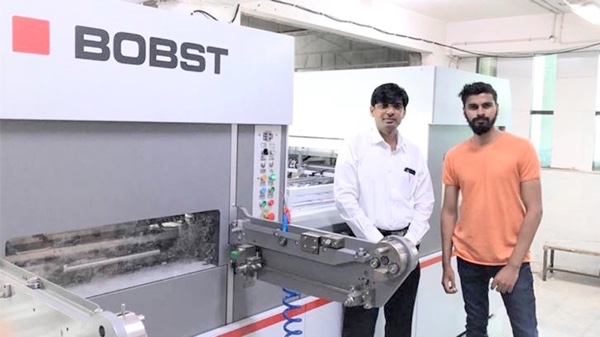 KG Sharma, Director of Miraj Multicolour, said, “We recently added a seven-colour offset press to meet our print production demand, so we needed a strong set-up in finishing to keep up with the new press. We believe post-press capacity should always be a notch higher so that we avoid any bottlenecks, or we are forced to reduce the printing machine’s speed, which is the more expensive proposition.”
The BOBST NOVACUT 106 E 3.0 version has some great new features and increased automation, which can enhance production, and reduce changeover times and machines stoppages. The BOBST AMBITION 106 A2 has been installed with a Collection Table and corrugation attachment to fold and glue corrugated boxes as well.
The partnership with BOBST started in 2013, when Miraj Multicolour was still relatively new in packaging and printing, and its post-press capabilities were not strong. Sharma said the BOBST team played a major role in the selection of products to match their needs. “Sturdy and robust machines, maintenance and after-sales services are the key points to continue the journey with post-press specialists,” he added. “After all, it was the best investment of our money even in such tough times.”
He said the company has invested more than Rs 250 million in the calendar year. The investments include the folder-gluer and die-cutter from BOBST.
Miraj converts around 2,000 tonnes of paper, board and kraft every month, with a team of more than 400 staff in its 24/7/365-operation. Sharma noted that under the leadership and vision of the Group Chairman Madan Paliwal, the company is growing at a CAGR of 20%.
Today, Miraj Multicolour serves as a printing house with printing and packaging solutions from pre-press to post-press, with a production capacity of 20 to 25 million cartons per month and exercise book capacity of 350,000 per day.