Home » Ricoh – The Mother of all Dragons

Ricoh – The Mother of all Dragons 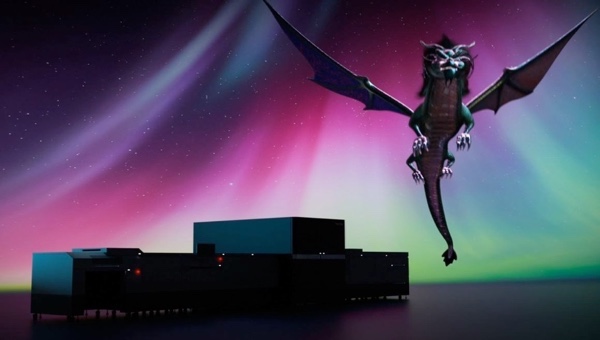 Wednesday 14. April 2021 - The normal flow of posts and comments among Graphic Arts professionals on our industrys regular Social Media channels has recently been disrupted. Along with the usual discussions about paper costs and margin protection, a very different topic has emerged suddenly.

By John Blyth, Marketing and Communications Manager, Commercial and Industrial Printing Group, Ricoh Europe Ricoh Europe
Speculation and curiosity about a dragon that appeared unexpectedly on Ricoh’s Social Media platforms grew and grew. There has even been an article in Great Britain’s hugely influential PrintWeek about this unusual arrival.
It was clear to all that the dragon was connected to the forthcoming Pro Z75 B2 plus sheetfed inkjet press from Ricoh. But why a dragon and what does it mean?
Well, it sprung from thinking about how to capture and convey the uniqueness of the new system and the excitement that was starting to build around it. It would have to be something special to match the fantastic properties of the Pro Z75.
So, we were drawn to the product’s roots in Japan and our guiding spirit of HENKAKU, or transformational change, that inspires our deep commitment to innovation and co-creation. We felt that the way we represent the Pro Z75 should nod firmly toward these factors.
Enter the dragon.
Dragons haven’t had the best of reputations in some quarters: with their habits of laying waste, hoarding treasure and fighting saints. But: in Japanese mythology, the dragon, or, Ryū signifies balance, freedom, wisdom and good fortune. Perfect right?
Now the dragon is circling the globe, as part of a worldwide campaign. It is touching down in places as far afield as America and China, where it is bringing the Pro Z75 to the attention of diverse graphic arts communities.
It is great to be able to see the viewings, shares and comments mount up as a result of the dragon. However, the main purpose of the films is naturally to help commercial printers and direct mailers appreciate the groundbreaking package of capabilities this new entrant brings to the B2 sheetfed inkjet space.
And now that the dragon has teased the arrival of the Pro Z75 with just glimpses of the press in two enigmatic short clips, we are now beginning to share some specific information on the future defining characteristics of the Pro Z75.
We have revealed just a few so far: in two more dragon-themed films, including the innovative liquid cooling system for the Ricoh print heads, the new Ricoh aqueous inks and the Ink Estimator tool.
Over the next few weeks the dragon will be bringing you more details. Most notably next month when we aim to paint a much fuller picture of this beast that is set to redefine production printing.
The advice – keep watching, because there is a new future out there. One where you can enjoy the advantages of digital toner production printing at the low running cost and high productivity of inkjet.

Meet the minds behind the Fedrigoni 365 calendar designs