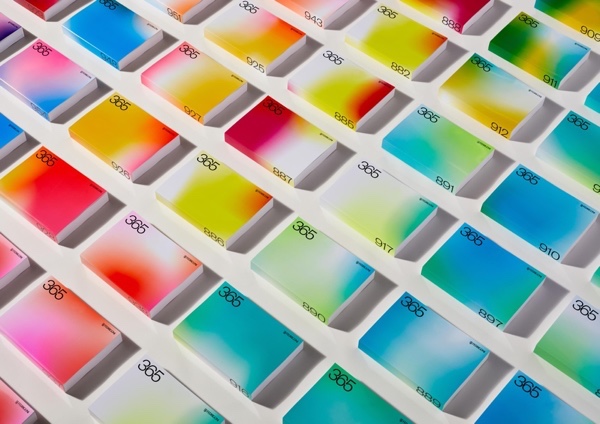 Wednesday 10. February 2021 - We had been aware of the Fedrigoni calendar and what a widely anticipated event it was for the design community for many years. It was a celebrated collaboration and had its own creative space. Designers looked forward to being part of it and it always resulted in a beautiful and inspiring piece of print.

By Danny McNeil, Creative Director, British design agency TM, who has been instrumental in the creation of the last four Fedrigoni 365 calendars.
We got our chance to be involved when we were asked to work on the 2018 calendar. At that point no one had been a partner on the project for any longer than a year. Fedrigoni usually chose different agencies to explore different formats and production techniques.
We have retained it for the past four years because Fedrigoni liked our different approaches. They gave designers the opportunity to engage with paper on a whole different level.
In the beginning we had some questions about the calendar’s function. We felt it was obsolete in today’s environment. Personally, I don’t think I have ever written in a calendar myself. We didn’t want to create a book with loads of empty pages. We wanted to work on something with a bigger ambition behind it.
For the first one we had a few ideas but we settled on asking 365 designers – one for every day of the year – to send in something. This has been the defining characteristic of the calendar since then.
This year was far and away the most ambitious. It was completely uncurated.
With the 2021 calendar we wanted to see if we could get to 1,000 submissions. We advertised through social media channels with an open call for entries. We wanted to include work from students as well as professionals. We didn’t reject anyone.
The initial brief was to transform up to 1,000 images into 4,000 unique calendars in ten different colour ways. This was the first time the calendar was digitally printed. Ricoh used the Ricoh Pro C7200x because of its fifth colour capabilities.
We weren’t fully aware of the high quality print finish possible using Ricoh digital technology. The colour gamut and spectrum achievable was eye opening. There was a lot of strength and depth and the designers really picked up on that.
To ensure that no design was used twice in one calendar and each design appeared equally, algorithms were created by data management solution /data.mill. Typesetting and page layout were automated by variable data publishing (VDP) solution, FusionPro. It also dynamically created the covers and jackets. RICOH TotalFlow BatchBuilder software, in conjunction with Enfocus PitStop Server and Ultimate Technologies Impostrip, managed the PDF files, sequentially batched the book blocks, colourised the images and graphics and queued the files for printing.
It was a shame this year that we could not have the usual launch event. It would have been a perfect way to show the complexity of the project by laying the books side by side.
Fortunately, the lack of a physical event did not impact interest. The calendar always gets good coverage but this year it was head and shoulders above previous years. Everyone has been posting about it because of their love of the project. To get that much buy-in for very little outlay has been great.
Also, this year, because of Ricoh’s involvement, it has been talked about in areas it wouldn’t normally have been. No print partner has ever promoted it before.
Ricoh is keen to see how it can be used to explore new opportunities. It is not alone. We are excited see what the next calendar could be now we know what digital print can do.

Digital fatigue? Why print is the perfect antidote

Distance is no obstacle to great ideas