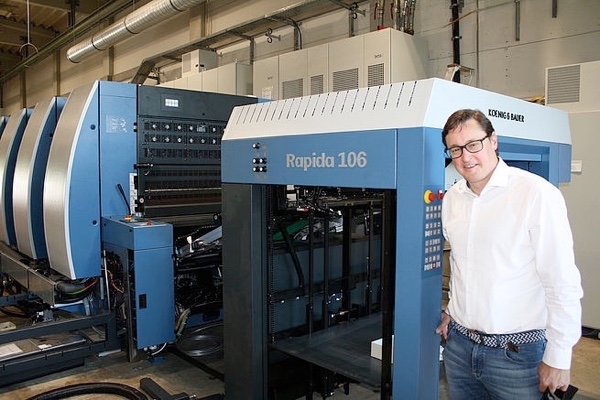 Thursday 18. June 2020 - In mid-May, the Nuremberg-based company LMB Louko began work on installing a new Rapida 106 featuring five printing units, a coater, and hybrid facilities for both conventional and UV finishing. This state-of-the-art, high-performance 3b press is joining a nine-colour model from the same series which has already been in use at the company for the past three years.

While the existing press, with its perfecting unit and additional inline coater, is specifically designed for printing covers, the company’s latest investment will, above all, allow economical production of jobs requiring a high level of finishing. This includes the full range of conventional and UV coatings, such as drip-off and matt/gloss effects, as well as finishing with gold or silver-coated PET film. Multiple washing and coating circuits used in the coater allow the conversion from conventional to UV coatings or vice versa to be completed faster. Moreover, the new press boasts the same equipment features as the Rapida 106 already being used in production. EES (Emission Extraction System) helps to eliminate any potentially unpleasant odours in the area of the delivery, thereby improving the workplace atmosphere for the operator by reducing finishing-related emissions.
The primary objective of the new press is to print the same production volume as before but in just half the time. This will be accompanied by a substantial reduction in material consumption and a significant improvement to energy efficiency.
60 million sheets per year
A wealth of experience gained since the most recent Rapida 106 was installed shows that these ambitious goals can be achieved. Production output has increased phenomenally. Managing director Oliver Stapfer has never had a reason to question the purchase: “At the time, it was a decision critical to the company’s survival.” The long Rapida 106 clocks up 60 million impressions year after year. Monthly performance reports show that the press is running at speeds over 16,000 sheets/hour for a third of the production time, and at more than 12,000 sheets/hour for 95 per cent of the time. In April 2020, the sheet counter stood at 184 million impressions.
All this has transformed production beyond recognition. Printing operations at L/M/B Druck’s facility in Nuremberg primarily cater to high-volume covers, order cards and supplements for mail-order companies with a primary focus on fashion and electronics. The production schedules are extremely tight. In many cases, the data arrive by noon. This requires an initial run to be completed by 8:00 p.m. the same day, with the remainder often due just 24 hours later. And these jobs can easily comprise up to 500,000 printed and folded copies. The capacity available to the Nuremberg specialists allows up to 600,000 sheets a day to be printed.
Fast and straightforward technology
The exceptional performance of the Rapida 106 has helped to significantly reduce the levels of stress involved in what are often hectic production processes. The DriveTronic feeder, which is highly praised by everyone at L/M/B, helps contribute to this: where the paper used to be brought into the storeroom 48 hours prior to the scheduled start of production before being moved into the press room to acclimatise for the last 24 hours, it can now be delivered just-in-time and be loaded directly from the lorry into the press. And this is even possible in winter, despite the significant differences in temperature and humidity.
Furthermore, the Rapida 106 facilitates considerable savings in terms of waste. Even when customers are present for press passes and the press is being adjusted by eye – to cater for their specific requirements, 200 sheets in total are sufficient to complete the whole makeready process. The customers are consistently amazed to witness how quickly the press adapts to the colour specifications. They say that they would never have believed how automatic regulation using QualiTronic ColorControl makes everything so much faster, and are surprised to see sellable products arriving at the delivery after just a few sheets.
Versioning and individualisation on the increase
Despite a high level of what are generally long runs, fast plate changes are increasing in importance. The magazine and brochure component business is undergoing a major upheaval. Versioning – not only in terms of languages – is on the increase, and more and more new customers are requesting highly individualised supplements. Small codes in the black imprinting of magazine supplements are also being used to identify where the order form has come from. Companies can then analyse this data to determine who reads what, and to predict the anticipated response rates from the individual magazines.
At L/M/B Druck in Nuremberg, everything is optimised for high performance. A large proportion of the work is subject to regular, repeat orders. However, these jobs are rarely for final products, and instead almost always involve specific print components which are turned into finished products elsewhere. This approach distinguishes L/M/B Druck in Nuremberg from many other classic commercial printers. At the same time, it guarantees a good basic level of utilisation of the company’s capacities.
The 45 L/M/B Druck employees work in up to three shifts at the company’s Nuremberg facility. Another 22 are based in Herzogenaurach. This is where the company’s classic commercial printing business is based, which operates a mix of half-format presses and digital printing systems. The combination of different equipment options at the two locations allows an exceptionally broad product portfolio to be offered.