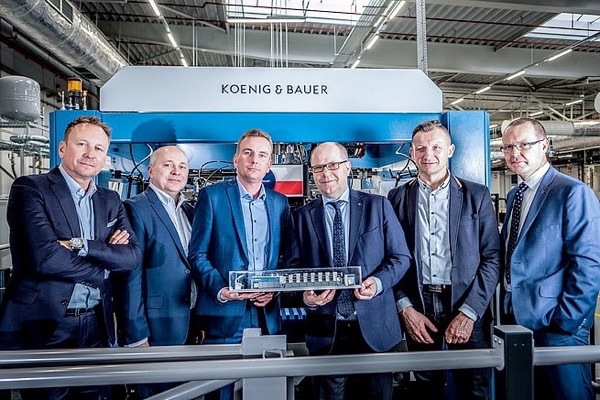 Tuesday 05. May 2020 - Large-format sheetfed offset presses manufactured in Radebeul have been quite literally a model for success on the global market for more than 50 years. Rapidas for sheet formats up to 106 x 145 cm (Rapida 145) and 120.5 x 164 cm (Rapida 164) print at speeds up to 18,000 sheets per hour and hold their own in all comparisons with their widely popular B1 counterparts when it comes to automation.

Packaging and commercial printers, in particular, appreciate the large-format Rapida models for their performance, production availability and long service life. At the same time, countless online providers, book and poster printers, and many other highly specialised companies swear by their modern and economical large-format technology from Koenig & Bauer.
Strong domestic demand
In 2019, large-format Rapidas contributed significantly to a very successful year for sales of sheetfed offset printing presses in Germany. Almost 100 printing units were ordered by the country’s commercial, specialist and Internet printers, as well as by traditional packaging companies. In other words, every single order placed for a new large-format press was snapped up by Koenig & Bauer (DE) last year.
A Rapida 145 with six printing units and coating equipment was installed at Gundlach Packaging in Oerlinghausen, for example. This was the company’s first sheetfed offset press “made in Saxony” after almost exactly 30 years. In May, Mugler Masterpack in Crimmitschau received a Rapida 145 with seven inking units, coating equipment, quadruple-length extended delivery and a whole host of further automation options, as well as the PDF-Check quality control system for sheet inspection with comparison against a pre-press PDF.
Print provider Walter Grieger Offsetdruck in Nettetal is another typical Koenig & Bauer user which has now opted for a new large-format Rapida. A Rapida 164 with seven inking units, a coater and extended delivery is set to come on stream in just a few weeks. In addition to displays and packaging printing for corrugated board products, it will be used to print gang formes for the folding carton industry. The new press is furthermore an entry card to the world of printing with an extended colour gamut.
Valued by international packaging printers
A year ago, Werner Kenkel, a Polish specialist for corrugated and solid board packaging, celebrated the 40th anniversary of its foundation. And taking this as a fitting occasion to further expand its production capacities, the company commissioned what was already its third large-format Rapida – a Rapida 164 with six inking units, a coater and triple-length extended delivery.
Superior Litho in Los Angeles, on the other hand, chose a Rapida 145 to add another 40 per cent to its printing capacity. The seven-colour coater press is the third large-format press from Koenig & Bauer which the company has installed in the space of a decade. The feature list includes UV dryers, inline colour control and PDF-Check. Superior Litho supplies packaging for the food, electronics and cosmetics industries, as well as for special products.
Commercial users in the spotlight
Bell & Bain is one of the oldest independent book and magazine printers in the United Kingdom. Last year, the company ordered another two Rapida 145 presses – one an eight-colour perfector for 4-over-4 production, the other a four-colour version, likewise with perfecting. With these two highly automated presses, Bell & Bain is targeting a significant increase in production capacity. Since 2004, it has installed a total of 36 large-format printing units, including two further eight-colour presses.
Neografia in the Slovakian city of Martin also owns an eight-colour Rapida 145 with a perfecting unit for 4-over-4 production. It is able to print both sides of 32 A4 pages in a single press pass. That adds up to some 10 million A4 pages per day.
The Edelvives Group is one of the few Spanish publishing houses whose company history stretches back more than 100 years. It is an important supplier to the education sector, and is similarly well known for its children’s and youth literature. In response to the trend towards ever shorter run lengths, the company installed a four-colour Rapida 145s last year. Today, up to 60 jobs are printed on the press on any given day.
Back to Germany: With Flyeralarm/Druckhaus Mainfranken, one of the market leaders in the web-to-print business relies on a fleet of Rapida presses. When defining the required features, the focus was placed above all on the fastest possible makeready, enabling clients to benefit from ultra-short delivery times for their print products.
Perfect technology for every application
Thanks to a broad diversity of configuration options, accessories and automation solutions, the large-format Rapidas are an efficient means of production for both established and niche markets. They can be equipped with a reel-to-sheet feeder, a double-pile delivery, intermediate drying units, additional printing units after coating and perfecting facilities, as required for the individual application. For packaging printing, they can also be placed on raised foundations and integrated into a fully automatic pile logistics system. Presses with up to 16 printing and finishing units are already in daily use.
But as if that were not enough: Rapida sheetfed offset presses are especially robust and are manufactured to provide many years or even decades of reliable service. A few of them have already passed the magic figure of 1 billion printed sheets. You can always rely on a large-format Rapida – now and over a long service life.

We print your world

The Rapida 105 PRO has catapulted us into a different league.