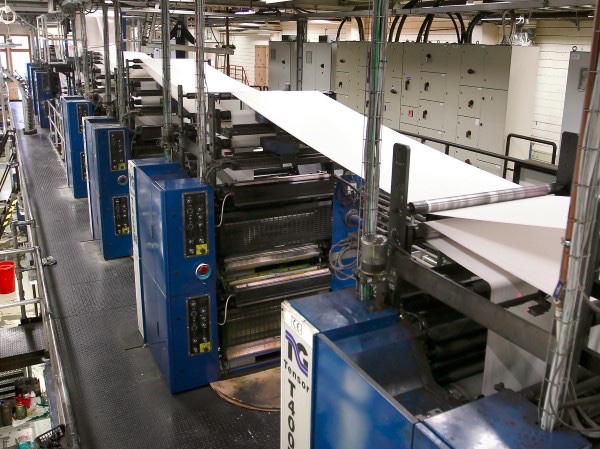 Thursday 13. October 2016 - Suomalainen Lehtipaino Oy, the Finnish-based printing concern, has decided to have a complete Q.I. Press Controls (QIPC) automation package installed on its Tensor T4000E with DCOS control. QIPC, the Oosterhout-based specialist in measurement and control systems for the printing industry, is to equip the press with its mRC-3D and IDS-3D systems for the automation of colour register, cut-off register, colour control and damp control at the printing plant in Kajaani, in the centre of Finland.

Old system
The current printing press is equipped with an ageing automation system. “At the time of purchase, the company was given the advice of the Original Equipment Manufacturer”, explains Erwin van Rossem, Head of Sales at QIPC. “However, its efficiency leaves much to be desired, with two desks per folder, one for the DCOS operator interface, and another for the Perretta ink and register control.”

Fact-finding trips to plants where QIPC automation systems have already been installed helped Suomalainen Lehtipaino Oy arrive at its decision. “We’ve seen the system operating now on several occasions at first hand and that convinced us to plump for QIPC”, adds Marja Niemi. “It has been our fourth closed-loop system in Finland since 2009. Thanks to the top-rate performance of those systems, we have been building up a good reputation in Finland”, explains Erwin van Rossem.

Installation and integration
A total of 14 IDS-3D and 7 mRC-3D cameras will be installed in Kajaani to take care of colour register and colour (ink-key control), damp (fountain-water) and cut-off control. The existing Perretta register system will be replaced and the new equipment will be directly integrated with Inventor for fountain-water control and Perretta for ink control. “Expectations are high”, says Marja Niemi. “We are banking on achieving quality assurance levels which are second to none and anticipate that we will make major savings in terms of waste and ink. Our target is to save 10 percent in ink volumes and 300 copies during the start-up phase.”

Being able to guarantee top-class quality is extremely important for a company such as Suomalainen Lehtipaino Oy, which works exclusively with third parties. The plant is the only one operating in the wider region and prints around one million copies for 50 different titles. Marja Niemi has a great deal of confidence in the future: “So far the collaboration between QIPC and ourselves has been working out well, as planned. I’m extremely happy with QIPC’s approach to work.”

At the same time, QIPC is thrilled at having received the order. Erwin van Rossem: “Most existing closed-loop colour and fountain-water control systems are still installed on the larger double-width presses. This order helps us sustain this positive trend: expansion on all fronts, an automation solution which is of interest to all newspaper printers.”