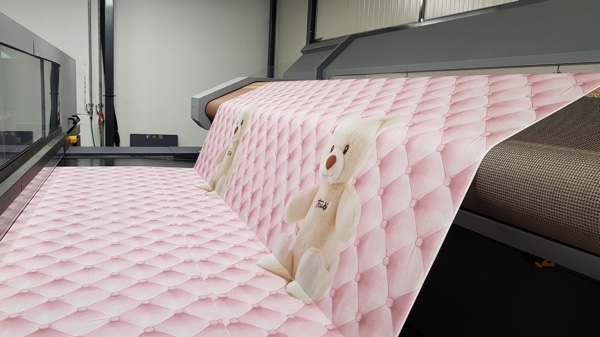 Friday 13. July 2018 - Durst, an inkjet pioneer and manufacturer of advanced digital production technologies, has helped Gabel Group to transform its retail business and open up more export trade in a partnership approach. A major household linen producer and retailer based in the heart of Italys textile area, Gabel has invested in Dursts Alpha 330 super high-performance multi-pass printer with the One-Step Greentex P ink.

Gabel Group is achieving industrial scale digital production with its Durst Alpha 330 printer at its headquarters near Milan and is now looking to invest in a second system to meet the evolving customer requirements of ever-shorter print runs and specialist customization for its business as it continues to diversify and expand into new markets.
“The face of retail is changing,” said Michele Moltrasio, Chairman and President of Gabel Group. “Today many of the orders involve printing hundreds of metres instead of thousands of metres as in the past, but numbers of orders are going up hugely. Retail shops want different designs and colours every two to three weeks because they want to continue developing new ideas and new collections. As we continue to expand our export market, which we anticipate will double within a year to around 20% of our business, digital will become even more important because virtually every European country has different specifications for its linen requirements. The Durst Alpha 330 is a perfect fit for us.
“We chose Durst because it is the best possible supplier and best quality for digital,” said Mr Moltrasio. “It has been meeting and exceeding expectations and we are hoping to invest in a second Alpha Series system again soon. More and more applications are becoming possible with digital, which now makes up 10% of our turnover, but I expect that figure to rise to around 30% of our business within five years. We’re printed 400,000 metres in our first full year alone with the Durst, which, with the customization opportunities, has opened up new markets including for exports.”
Gabel Group has three factories, is a €60m turnover business and employs 400 people, of whom half work in its 40 retail shops across Italy and the rest in the production plants and offices. The company also has its products in more than a thousand retail outlets across the world. Digitally-produced linen collections now being sold include High Definition, Planet Teen and Trudi.
The Alpha 330 uses the Durst One-Step Greentex P ink, which was developed especially for the Alpha Series of printers. The environmentally friendly pigment inks are based on Durst Water Technology. Materials such as cottons, polyesters and polycottons do not require pre- and post-treatment with this ink, so the whole process is accelerated and simplified, and is nearly a “dry” process.
Martin Winkler, Segment Manager Durst Textile Printing, said: “As a manufacturer of advanced digital production technologies for industrial applications, Durst is playing a significant role across so many segments. We see textile printing as a really important growth opportunity for companies such as Gabel to invest in future systems that will increase their market share and business opportunities. Cost transparency and predictability are crucial – the Alpha Series really helps customers grow their business. Gabel is a perfect example of how a respected company through a partnership with Durst is pushing the barriers and innovation in textiles by investing in new technologies.”