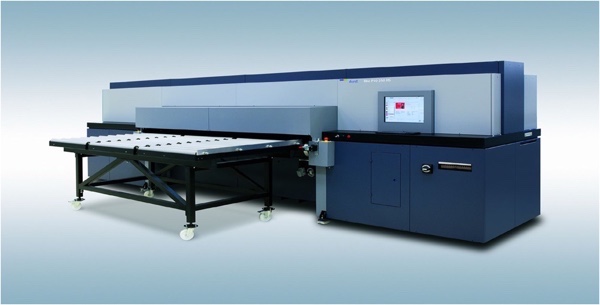 Friday 15. June 2018 - Wide format service provider Macro Art started live printing this week with two more Durst machines as new customers come on board in continuing rapid expansion. Little more than four years after a management buyout, Macro Arts turnover has shot up from 6million to 11million. Contract gains are being secured on the back of the new investments in Durst systems - now totalling four that have revolutionized its business.

The Durst Rho P10 250 HS-Plus UV hybrid system and Durst Rho 512R-Plus roll-to-roll UV printer were installed at Macro Art’s base in Abbotsley, Cambridgeshire. The Rho 512R, which includes fine art mode, will enable Macro Art to produce fine quality, backlit work. Macro Art, which specialists in larger project and dye sublimated textiles, will be using the machines across its core areas of business. These include events, exhibition and retail sectors where ever-shorter lead times and higher print quality are demanded by customers.
Michael Green, Macro Art’s Commercial Director, who is based in its project management office near Waterloo in London, said: “Durst kit has revolutionized our business. The investments have enabled us to step into quality markets that were unobtainable before. We would not be where we are today without the Durst equipment. No argument. We could not have done without them.
“As one example, the investments will help with backlit work commissioned by a major new retail client that requires top quality print in a very short lead time. And in another we could never have created 60% of the exterior printing for an international air show within the agreed timeframe without our 5m Rho. Print requirements and delivery, even to Europe, are now as little as 48 hours. With the new investments, we are incredibly excited about the potential opportunities ahead.”
The P10, often referred by customers as the “benchmark in quality, production and reliability”, will replace another manufacturers equipment and ramp up capacity. There were also environmental considerations for the Rho 5m printer, which will also benefit from lower ink by using Durst flexible inks. The company already has Rho 512R and Durst Rho 322 production printers from Durst, the manufacturer of advanced digital production technologies.
Peter Bray, Managing Director of Durst UK and Ireland, said: “We’re confident that these new investments in our systems will help take their business to yet another level. Macro Art is a perfect example of how companies really engage with the Durst ethos when they visit Lienz or our head office less than two hours away in Brixen, northern Italy. Durst is a special company producing fantastic products and software.”