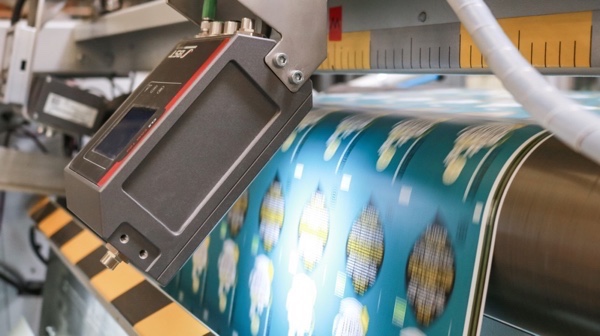 Wednesday 23. November 2022 - In the first step, a system was expanded with the CLS CAM 100 object sensor from BST, which can also be used to control according to objects and motifs directly in the printed image. The goal: to save the control line and thus waste - about five millimetres of web width.

At its headquarters in Oerlinghausen, the Gundlach Packaging Group produces folding boxes for food products from fibre-based materials using gravure, flexo and offset printing. In order to use machines and resources efficiently, the company already relied on the CLS PRO 600 contrast and line sensor from BST on its slitters, which controls stably and precisely according to web and print edges or printed lines.
In the first step, a system was expanded with the CLS CAM 100 object sensor from BST, which can also be used to control according to objects and motifs directly in the printed image. The goal: to save the control line and thus waste – about five millimetres of web width.
The BST sensor is used on the slitter and ensures that the material is fed precisely to the cutting process and matches the print image. Axel Baake, Head of Quality and Innovation at Gundlach, explains the decision for the supplementary sensor as follows: “Our company is committed to consistent sustainability. Every investment decision is made with a view to economic success now and in the future. In accordance with this maxim, Gundlach produces resource-saving and recyclable packaging in order to make an active contribution to CO2 reduction.”
Regulation according to objects
The special challenge in the production process of cell-based packaging is the spatial change of the material due to external influences such as temperature or humidity. Against this background, the CLS CAM 100 camera-based sensor from BST brings a further advantage: since it can control the web directly according to objects or motifs in the centre of the web, the influence of web width fluctuation is minimised. In this way, the BST sensor ensures process reliability and the optimum quality of the end product.
Effective web width compensation
“The CLS CAM 100 enables maximum flexibility, as control according to the web edge or a control line is still possible. However, the main advantage of controlling according to objects is obvious,” summarises Ingo Ellerbrock, Head of Product Management at BST. “The control line can be saved without having to compromise on control accuracy.” Thus, he says, the CLS CAM 100 is the perfect product for Gundlach’s plans because the sensor measurably saves material and thus CO2. “In line with our corporate values, we want to avoid waste. The reduction of waste by five millimetres at the web edges brings us material savings of up to 1%, depending on the web width,” says Baake.
The installation of the sensor was not a challenge for the packaging specialist because it can be put into operation via plug-and-play on the installation side. “The retrofit was carried out routinely and without long machine downtimes – an advantage of all BST systems, which is why we have been using them for decades with the best results. They run stably and are easy to operate,” says Baake. Cooperation, support and training run to the advantage of both companies thanks to business relationships based on partnership.

Quality assurance and sustainability go hand in hand more than ever

BST eltromat and SeeOne signed a partnership agreement at K 2019

BST eltromat strengthens its core competencies with restructuring in some areas