Home » Jostens Selects Heidelberg as Strategic Partner for the Future

Jostens Selects Heidelberg as Strategic Partner for the Future 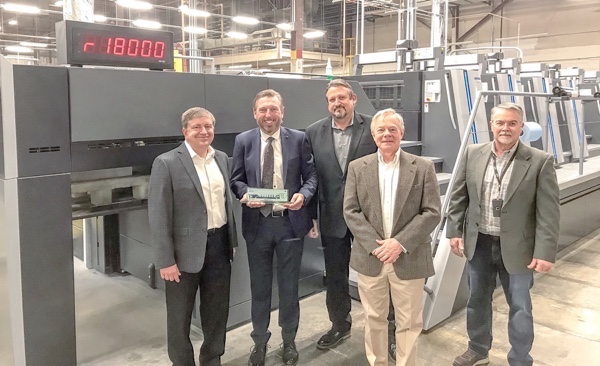 With an average press run of only 400 sheets, Jostens needs technology robust enough to handle the world record number of makereadies required each day to produce such a high volume of books. Ultimately selecting Heidelberg as its strategic partner for the future, the company recently installed a Speedmaster XL 75-5+L with Anicolor technology and two Speedmaster XL 106-8Ps with Push-to-Stop technology – all controlled by a dynamic Prinect workflow solution.
“More Than Picking a Press”
To keep up with its demanding workload, the Clarksville, Tenn. printer crews its 560,000 square foot plant 24/7 with a team of 800 employees during peak seasons. “The yearbook business is all about getting in and out of makereadies as quickly as possible and producing a huge number of jobs every day,” said Vice President of Global Operations, Paul Dowden. “We need technology flexible enough for easy makereadies but well-built for high volumes.”
For Jostens, production is broken into two different peak seasons: October-March for producing its award-winning covers and February-May for running the books’ text or inside contents. Needing a more efficient solution for its cover production, Jostens turned to the Speedmaster XL 75 with Anicolor inking technology, which it installed in early 2020. “We were running covers on our older presses, but we really needed a dedicated press that could get up to color faster and consistently hit color within 30 makeready sheets,” said Jeff Phelps, Press Process Engineer. The Speedmaster XL 75-5+L Anicolor, which runs at speeds of 15,000 sheets per hour, has an extremely fast inking unit that is designed to print offset quality at peak productivity for cost-efficient short runs.
One of the Anicolor’s main economic benefits is its wastepaper savings of up to 90 percent. According to Phelps, “The Anicolor is the perfect fit for us—single-sided, high quality, low-waste printing. We’ve seen great improvements in our efficiency, which has resulted in significant cost savings for us.” Through the reduction of waste sheets and makeready time in addition to now running its covers two-up, Jostens can produce its daily volume of covers in only one shift, which creates room for future growth. “When we purchased the XL 75 Anicolor, it was more than picking a press,” said Dowden, “it was about picking a strategic partner.”
Makeready World Record
The next component of Jostens’s strategy was more efficient production for its books’ interior content pages, which it was running on older presses from a competitive manufacturer. In early 2021, Jostens installed two Speedmaster XL 106-8P presses equipped with the new Heidelberg User Experience (UX) and Heidelberg’s Push-to-Stop autonomous manufacturing approach – driven by Intellistart 3, a unique integrated software, and artificial intelligence. The Push-to-Stop approach and the AutoPlate XL, an automatic simultaneous plate change system that controls precise plate feeding at the start of each job, greatly reduce the number of required operating steps during a job change. The Jostens team credits the presses’ advanced technology and high speeds of 18,000 sheets per hour for almost doubling the number of makereadies the company completes in a 12-hour shift. Based on the data that Heidelberg collects from its connected presses, Jostens produces more makereadies each day than any other press in the world. “With our previous presses, we could get 130-150 jobs completed in 12 hours. With the XL 106, our original goal was 180, but we’re achieving 220 makereadies in a single shift,” said Wayne Davidson, Yearbook Manufacturing Manager.
Faced with two challenging seasons in 2020 and 2021 due to COVID-19, Jostens experienced very shortened production cycles as it was difficult to get content from schools to produce yearbooks. “Due to fewer in-person events, we had to creatively brainstorm with our customers to create meaningful yearbooks,” said Jim Self, Senior Director of Grad Products. Even with the compressed seasons, the newly added capacity created by the XL 106s enabled Jostens to produce the same number of jobs and sheets it did in previous years and, according to Self, provide its schools with “uniquely memorable yearbooks in these COVID affected school years.”
“Great Partner” for Jostens
Much of Jostens’s efficiency stems from its presses being integrated with Heidelberg’s Prinect Production Manager workflow. With Production Manager, job files and presetting data are sent to the press directly, which greatly automates the press set-up and decreases makeready time. Installed at the beginning of one its peak seasons, Self said Heidelberg worked collaboratively with Jostens to integrate the workflow with some of the company’s existing processes. “It wasn’t a plug-and-play solution, but the teamwork was outstanding and very beneficial to us during our peak season.”
In addition to Prinect, Jostens is also leveraging the power of Heidelberg Assistant, an online platform of data-driven smart services, to review its production numbers with Heidelberg’s team of online advisers to ensure the company is achieving its productivity goals. Additionally, the team uses the portal to access Heidelberg’s eShop ecommerce site, which is an efficient way for Jostens to order the various Saphira consumables that it uses on its presses.
While Jostens has made significant investments in the last 18 months, the company views this as just the start. “The presses we selected came down to performance, capability and cost savings, but this was an overall strategic decision. We believe that Heidelberg is a great partner for Jostens,” said Dowden. As the company continues to improve and position itself for growth, it’s looking to further extend automation in the near future and is considering other updates for capacity and technological efficiencies.

Zaikio wins another big name for Zaikio Procurement with Antalis

New Print Media Center at the Heidelberg site in Wiesloch-Walldorf