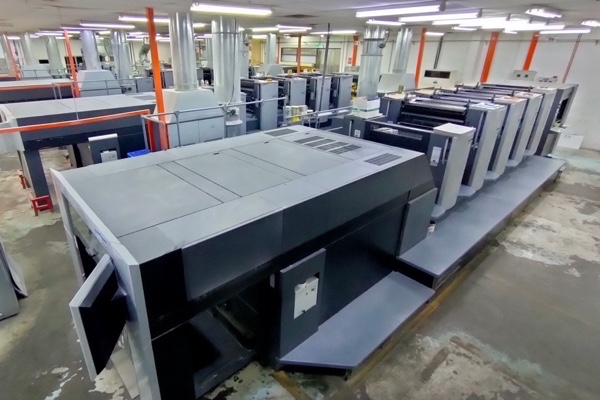 Friday 23. July 2021 - Malaysias packaging market has been growing strongly in recent years. An annual growth rate of 3.8 percent has been predicted for the period 2019 to 2024, and the folding carton segment is set to be the number one growth driver (source: Global Data).

The coronavirus pandemic has given a further boost to this development. Solid board packaging for medical products, masks, and gloves is in particular demand. This growth has led packaging printers in Malaysia to invest in cutting-edge production technology. To a large extent, these companies are placing their trust in state-of-the-art sheetfed offset technology from Heidelberg – especially presses manufactured at the Heidelberg site in Shanghai.
Complete system for Percetakan Konta
Percetakan Konta is based in Perai, in the northern state of Penang, and has been a loyal Heidelberg customer for many years, having been won over by its reliable technology and exemplary services.
Around six years ago, Percetakan Konta replaced an older Speedmaster CD 102 with a new four-color Speedmaster press with coating unit from the Heidelberg plant at the Wiesloch-Walldorf site in Germany. In 2017, this press was joined by a Speedmaster CD 102-5+L manufactured in China. The next investment came just one year later in the form of a Speedmaster CD 102-4+L, also manufactured at the Chinese plant in Shanghai.
In parallel to this third sheetfed offset press, Percetakan Konta also ordered a Diana Eye 55 offline inspection system. This system inspects the quality of finished folding carton blanks at a speed of 300 meters per minute. In addition to identifying printed image and typeface errors, high-resolution camera technology analyzes the gloss levels of coated packaging, blind and foil embossing, and holograms. An OCR (optical character recognition) function also detects incorrect characters, punctuation marks, accents, and decimals. In 2020, the Diana Eye 55 from Masterwork was joined by a second, identical inspection system and a Suprasetter 106 CtP platesetter with Prinect Production Manager packaging workflow.
Vivar Printing invests in packaging printing
Vivar Printing Sdn Bhd (Vivar) was founded in 1985. For the first one-and-a-half decades of its existence, the company’s main specialty was book production. In 2010, Vivar recognized the opportunities offered by the rapidly growing packaging market. It initially invested in the flexible packaging segment and then moved into folding carton production, which involved creating an official packaging division and investing in a Speedmaster CX 75-5+L from Heidelberg. This five-color sheetfed offset press with coating unit provided Vivar with a robustly built printing system based on a design principle that was equally suited to commercial products and high-quality packaging. “Key features of the Speedmaster CX 75-5+L include quick and easy job changes, outstanding print results, and high net outputs,” says Kok Wai, Managing Director of Vivar, who describes this press as exactly right for the needs of his company. Barely a month after the Speedmaster CX 75 started operating, Vivar made its next big investment and ordered a Speedmaster CD 102-5+L from Heidelberg. The contract for the five-color press in the 70 x 100 sheet format with coating unit, which was manufactured in Shanghai, was signed in November 2020 and it started operating in March 2021.
Book production has remained a key cornerstone at Vivar, but Kok Wai insists moving into the rapidly growing folding carton market was the right decision. Although his company’s sales fell significantly last year due to COVID-19, he is optimistic about 2021. “As we see it, packaging production offers a great deal of growth potential that will shape our company’s development in years to come,” he says.
Seven Speedmaster presses at Tiong Tat Printing Industry
The pressroom of Tiong Tat Printing Industry (Tiong Tat) has six Speedmaster CD 102 presses and a Speedmaster XL 105. In the interests of productivity, the majority are elevated presses. The latest Speedmaster CD 102-5+L – the company’s third Speedmaster press to have been manufactured at the Shanghai plant – entered into operation in July 2020. Prinect Production controls the workflow based on volumes and Tiong Tat uses a Suprasetter 106 for CtP operations. Two Easymatrix 106 CS (cutting and stripping) die cutters from Masterwork Machinery have been operating in the postpress section since 2018. “We very much appreciate the equipment’s reliability and the teamwork with Heidelberg, so we opt for technology from this manufacturer time and again,” says Managing Director Tan Jock Hong, who has won several awards for her leadership qualities.
Tiong Tat started out in 1993 with a single pre-owned press and a production area of around 130 square meters. Today, this has grown to a total area of close to 82,000 square meters, which makes the company one of Malaysia’s largest packaging printers. Packaging for hygiene gloves is its principal market. Tiong Tat prides itself on being a market leader and demand is growing, as confirmed by Tan Jock Hong. “In 2020, in the midst of the pandemic, we decided to expand our sheetfed offset capacities,” she reveals, referring to this step as the right decision at the right time and emphasizing that the company once again obtained excellent advice and support from Heidelberg.

Zaikio wins another big name for Zaikio Procurement with Antalis

New Print Media Center at the Heidelberg site in Wiesloch-Walldorf

Heidelberg surpasses forecast thanks to strong final quarter in FY 20202021