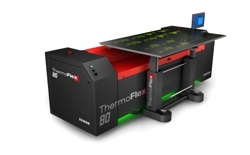 Wednesday 27. April 2016 - ThermoFlexX will use drupa2016 for the worldwide launch of several major additions to its industry-leading product portfolio, including the completely redesigned ThermoFlexX 20 and ThermoFlexX 30 digital flexo plate imagers. Visitors to the stand, which is being shared with the Flint Flexographic products division, will be able to see a dual-head ThermoFlexX 80-D demonstrated with a new pixel-stitching functionality, plus a ThermoFlexX 48-S on-line to an EVO 3 LED exposing unit. Other equipment will include a basysPrint 861x-B, a CTP system for conventional UV plates.

“ThermoFlexX is a pioneer in the field of digital flexo plate imagers and the host of groundbreaking features offered on our larger models have been incorporated into the smaller ThermoFlexX 20 and 30 versions,” says Christophe Lievens, director sales and marketing for basysPrint and ThermoFlexX. “Their introduction brings to the labels and folding carton sectors an array of flexibility, productivity and quality that is unrivalled amongst digital flexo imagers.”

Features offered by the ThermoFlexX 20 and 30 imagers include a choice of resolutions from 2,400 dpi to 5,080 dpi. The latter is the highest on the market and allows the production of halftone screens of 250 lpi, suitable for intricate, high quality work. The ability to change resolution on-the-fly enables jobs with different resolutions to be produced on the same plate.

The state-of-the-art imaging concept consists of three independent modules – the motor, laser and optics. The flexible design means that replacing any of these modules is straightforward, which simplifies service and hardware upgrades and provides the possibility for remote optical fine-tuning. The newly designed optical system has improved imaging quality even further.

“The ThermoFlexX vacuum slider is almost famous in the field of digital flexo plate imagers. The vacuum to areas of the drum not mounted can easily be cut off by moving a slider to the edge of the plate. This removes the need to apply special tape, or alternatively cutting plates to fit the unused part of the drum. The operator can fit and expose plate off-cuts that would otherwise normally be thrown away.”

Other features incorporated into the new ThermoFlexX 20 and 30 models include an easy-to-use clamping system with auto-drum locking, convenient plate loading, a comprehensive user interface and an integrated carbon filter system.

The ThermoFlexX 80-D is the largest imager in the range and the dual-head version at drupa2016 will be used to demonstrate a new pixel-stitching functionality that allows both lasers to be utilized to expose one job covering a complete plate.

“By positioning the first head at the beginning of the drum, and the second head half-way along, each will expose 50% of the plate and a seamless pixel stitch will be made where one laser has stopped and the other started. The new pixel stitching functionality, shown for the first time at drupa2016, will be available on ThermoFlexX 80-D and 60-D models from the exhibition onwards.”

One of the other exciting new products on the stand is the ThermoFlexX 48-S. This will be demonstrated on-line to an EVO 3 LED exposing unit, which combines high efficiency and consistency with a neat, slim design. During use the operator loads a plate onto the FlexTray unit. The imager feeds this automatically into the drum and begins imaging. While this is happening, the next plate can be positioned on the FlexTray. Once imaging is completed, the imaged plate is fed automatically into the EVO 3 unit, where back and main exposure occurs simultaneously.

All ThermoFlexX imagers utilise IPG fibre lasers operating at 1,064 nm, which combine low energy consumption with high reliability. The imagers will expose any plate with a LAM layer such as flexo, letterpress and dry offset, as well as Gallus Screeny (digital screen) and ablative film. They can handle any thickness from a 0.18 mm ablative film to a 6.35 mm flexo plate, and support all relevant technologies such as flat top dots. This means that if a printer, at the time of installation, uses plates from any leading supplier e.g. Flint, DuPont, Asahi, MacDermid, Toyobo, Toray etc., they can continue without changing their normal working practices.

ThermoFlexX imagers accept 1-bit TIFF files generated by any workflow, RIP or front-end and will handle any innovative screens such as hybrid or surface screens. The screened 1-bit TIFF file could be a single job file, which can be assembled on a template, or it could be an already assembled 1-bit TIFF plate. A philosophy of ‘openness’ means that ThermoFlexX imagers can be integrated seamlessly into existing workflows such as those from Esko Graphics, Hybrid Software, Kodak and Agfa.

“We are delighted to have joined the Flint Group’s global organisation, not least because the opportunities to accelerate business growth are extremely exciting,” says Christophe Lievens. “Xeikon has shown that its dedication to the newspaper, offset and flexo sectors has paid off in terms of market share, customer satisfaction and financial contribution. This next chapter in our more than 20-year existence opens many new doors for Xeikon, as well as for our customers, employees, partners and stakeholders.

“The Flint Group has developed strong working relationships with many leading global organisations within the graphic arts and packaging industries. Xeikon’s aim of delivering exceptional value, unparalleled service, consistent quality and continuous innovation is enhanced even further by the Flint Group’s reputation, knowledge, infrastructure and support.”

Ulrich Etiketten speeds up with the Xeikon CX3