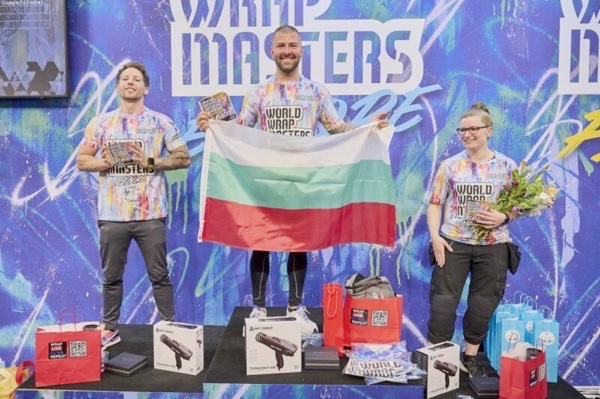 Ivan Tenchev from Bulgaria was crowned World Wrap Masters Champion 2022 at FESPA Global Print Expo 2022, which took place from 31 May to 3 June 2022 at Messe Berlin in Germany.
During the final, regional winners from the UK, Germany, Czech Republic, Japan, Denmark, Brazil, Finland, Hungary, Netherlands, Norway and Mexico were challenged with wrapping VW Golf cars and LED figures of the famous Berliner “Ampelmännchen”, the small green and red man that can be found on numerous pedestrian traffic lights in Berlin. The 2022 competition was sponsored by HP, 3M, Wrapstock, PLASTGrommet, Car Wrapper 3D and OXY Tools.
Commenting on his world title win, Tenchev said: “There are no words to describe what an honour it is for us to again defend the Bulgarian flag at the World Wrap Masters in Berlin and to win it for the second time. It’s amazing that I fulfilled my dream twice, not just once. I would like to congratulate everyone who was in the final with me, all the amazing competitors really deserve to be here.”
During the Berlin event FESPA announced the launch of Wrap Fest, a brand-new event dedicated exclusively to vehicle wrapping, vinyl installation and detailing. The launch event will run for the first time from 26 – 27 April 2023 at Silverstone racing circuit, the iconic home of the British Grand Prix.
Wrap Fest will provide the backdrop for the new UK and Ireland leg of the 2023 World Wrap Masters competition, culminating with the international final at FESPA Global Print Expo 2023 in Munich, Germany (23-26 May 2023).

Brand new content to inspire and educate visitors at Fespa

FESPA Digital Printing 2021 is a milestone in the printing industry

Fespa brings business back with first live events in Europe