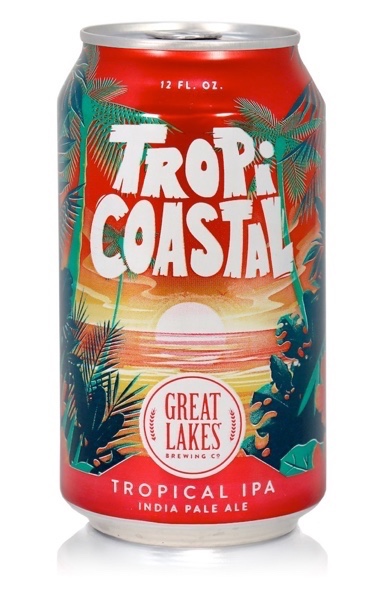 Friday 17. June 2022 - Great Lakes Brewing Company in Cleveland has defended their title and won the annual Colored by INX Can Design Contest. Their entry for TropiCoastal Tropical IPA beer follows on the heels of last years victory with their design for another craft beer.

This year’s competition is the first to be determined by an independent panel of six judges. Before selecting Great Lakes as the winner, they reviewed all of the submitted entries and chose five finalists. The others considered for this year’s title included Founders Brewing Co., Molson Coors, Saint Arnold Brewing Company and TUPPS Brewery. Each entry was created by designers who produced a commercial can design before December 31, 2021, using the INX Metal Color Catalog.
“The INX Color Catalog continues to be instrumental in serving the beautiful illustrations and designs on each of our cans, and appealing to customers with exciting visual appeal on the shelf,” said Jameson Campbell, the creative manager for Great Lakes Brewing Company.
“It helps us best match color, opacity and transparency of inks to maximize the boldness of each can’s final appearance. We want them to look just as good as the beer inside tastes. INX has helped us to deliver each beer’s unique story and flavor promise to our customers, reach new drinkers and build even stronger brands.”
Great Lakes Brewing Company offers a sophisticated and diverse selection of beers. They’ve been in business since 1986 and helped revive the Ohio City neighborhood of the city. Campbell said his team took a different approach with this year’s winning entry.
“With TropiCoastal Tropical IPA, we broke a few of our conventions and moved away from our typically detail-oriented illustrations to a slightly more simplistic, yet still expressive scene. That means color was even more important, particularly as this brand appeals directly to the drinker’s appetite and hints at its flavor cues with the color palette. The INX Color Catalog helped us consistently deliver the intended colors across all of our packaging. It gave us an extremely helpful point of reference for our suppliers to ensure efficiency and satisfaction throughout the approval process.”
Renee Schouten, INX’s Vice President of Marketing who manages the competition, said Great Lakes Brewing Company will be receiving their engraved trophy soon.
“I congratulate Great Lakes on their repeat victory. We received an outstanding group of entries this year, and I know it was a tough decision for our judging panel when they voted,” she said. Two INX executives, INX Color Perfection Manager Sarah Jacks and Eduardo Ribeiro, Commercial Manager for INX International South America, led the six member voting team.
“I want to thank Scott Drucker, Mike Grady, Laura Perryman and Ronald de Vlam for their time and opinions as this year’s independent judging committee. They truly are very creative people and did a terrific job. We plan to rotate our panel of judges and they have set the bar extremely high for next year’s group.”

Colored By INX Can Design Contest entries due by April 29

INX to place focus on Sustainability at INFOFLEX 2022

INX Can Design Contest Voting now through May 17