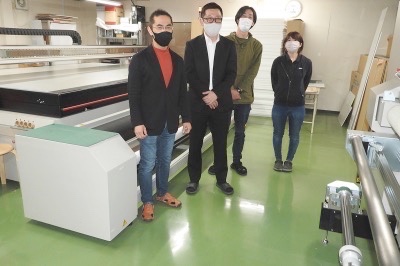 Hataya (Kobe, Japan) was founded in 1982 as a silk screen printing company. Since then, it has steadily digitized its operations. It is currently involved in the planning and manufacturing of signs and displays.
Faster operations, less mistakes
Mr. Numata, who works in the production department of Hataya: “I couldn’t do without Asanti anymore. Even complicated output work can be easily processed using the templates created by the software. Asanti automatically performs a number of output tasks, such as the placement of cut marks. That way, you don’t have to open the files in Illustrator, which reduces output errors. When I opened the artwork in Illustrator, the layers were complicated and locked, so I tended to make mistakes such as moving or erasing objects. The work that took 30 minutes before can now be done in about 10 minutes.”
Mr Yoshikawa – president of Hataya
Is it true that the output settings are made first, and then just applied to the print data?
Mr. Yoshikawa, President of Hataya: “Indeed. It’s very easy. We always have a lot of print orders to process. Thanks to Asanti, I feel that we can proceed faster to the finishing stage, including the cutting process, and that the productivity of the overall manufacturing process has improved”.
Mr. Numata: “If you repeat simple tasks, you will lose your concentration and you will be more likely to make mistakes. Nowadays, the number of mistakes has decreased dramatically thanks to the automation possibilities offered by Asanti.”
“The work that took 30 minutes before can now be done in about 10 minutes. “
Does Asanti drive non-Agfa printers too?
Mr. Shimada, also a member of the production department at Hataya: “Once the workflow has been established, PDFs that have been processed by Asanti, including mark placements, are printed on non-Agfa printers too.
The workflow has improved productivity and reduced mistakes. Was it difficult to prepare your organization for the use of Asanti?conventional rate.”
Mr. Numata: “It was necessary to make some small adjustments, but since Asanti has a wide range of settings, it was possible to tune it to our operations. Certainly, at first we needed to create templates, and to set up rules for mark placement and various other tasks, but after these initial efforts, it became easier. We can work exactly the same way as before without having to change our operation processes.”
Mr. Shimada: “The more complex the work, the greater the risk. our accident rate is calculated in-house: it is less than one tenth of the conventional rate.”
“The number of mistakes has decreased dramatically thanks to the workflow software. It is less than one tenth of the usual rate.”
Cooperation
Are you satisfied with Asanti and with Agfa’s software support?
Mr. Shimada says: “When preparing the initial settings for our operation, I sometimes asked Agfa to do something unreasonable, but they were very cooperative.”
“Agfa made a proposal which was different from all other proposals, which is why we decided to go for Asanti.”
Mr. Numata, was a bit hesitant at first: “When there was a proposal for workflow, I was worried whether it would indeed be possible to improve our operational efficiency.” Mr. Shimada adds: “In fact, we received various proposals for workflows from other companies, yet many issues needed to be solved in order to actually operate them, and so I gave up. Agfa, however, made a positive proposal which was different from the other proposals, which is why we decided to go for Asanti.”
Ms. Kato, another member of the production department at Hataya, remarks: “Asanti will be upgraded on a regular basis, so I’m glad that we can collect our remarks and requests and transfer them to Agfa.”
What do you expect from Asanti and Agfa in the future?
Mr. Yoshikawa: “I would like to recommend Asanti to all other printing companies. It has had a huge impact on our operations by shortening lead times and reducing mistakes. Even work that requires an urgent response can be completed well ahead of time, without any mistakes. We believe that it was worthwhile to be able to improve productivity without the need for large investments in equipment.
In my position as president, it is important to transform ideas that originate during encounters outside the company or conversations with manufacturers into actual improvements. By connecting Agfa and the members of our production department, I am very proud that my excellent staff members cooperated well with Agfa and achieved the before mentioned improvements.
Unlike many manufacturers who end their relationship after selling a machine, I think Agfa will continue to propose improvements. I am looking forward to more suggestions.”

ColorDynamics masters the dot with SPIRL screening and Energy Verve

Agfas Eclipse is easy to handle and to clean