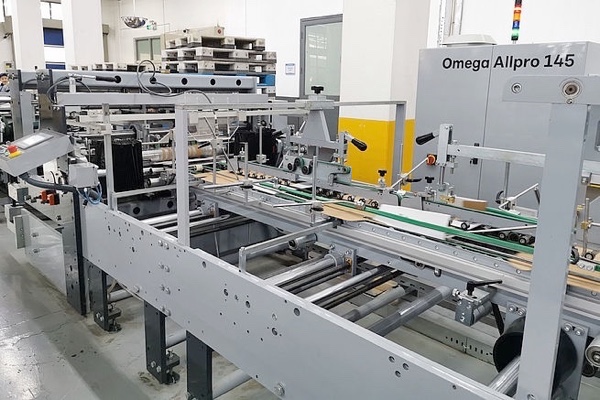 Monday 26. April 2021 - The Omega Allpro 145 supplied by Koenig & Bauer Duran produces straight-line, crash-lock and double-walled cartons, as well as six-corner cartons and special packaging for fruit and for clothing. The machine reduces work intensity, and boosted the level of production automation.

Last year, Tianjin Haishun Printing & Packaging Co., Ltd., which is based in the Chinese city of Tianjin, started up its first fully automatic folder-gluer for cartons featuring special forms.
The Omega Allpro 145 has allowed daily output from the folder-gluer to increase to up to 50,000 folding cartons. In the past, production generally totalled anything from 12,000 to 15,000 cartons per day. In other words, production volumes have increased by around 300 per cent, even though staffing levels remain unchanged. The company has also become more flexible, as the machine has opened the door to new markets, has shortened turnaround times, saves storage costs, and offers opportunities for new strategic growth in the business.
Higher level of sheetfed offset automation as well
Now that Tianjin Haishun is using the Omega Allpro 145 for production, it is now also using post-press equipment from Koenig & Bauer for the first time. The company has been using sheetfed offset printing presses from Radebeul ever since the company was founded 18 years ago. The current line-up encompasses nine presses from the Rapida 105, Rapida 106 and Rapida 145 series – the majority of them feature coating facilities and pile logistics, and a number also boast special features such as a reel-to-sheet feeder, perfecting unit, UV accessories, and highly automated FAPC or SPC plate changers.
Tianjin Haishun has grown into a highly advanced, fully integrated print company. Its employees, who number almost 1,000, work on a production floor extending across 50,000 m2. The company generates a turnover of more than RMB 700 million (approx. €90 million). Alongside packaging for foods, pharmaceuticals, beauty products, FMCGs, clothing and electronics, the company portfolio also includes hardcover and paperback books, calendars, stickers and many other commercial products.
Export markets as far afield as Europe and America
Tianjin Haishun is now able to deliver its products and services to customers all over China from the Tianjin Binhai New Area, which has the largest port in North China and is in close proximity to the Beijing metropolitan area. At the same time, exports are regularly shipped to overseas markets, for example South Korea, Europe and the United States. Tianjin Haishun is widely respected as a reliable and solid industrial partner.
The company has been awarded all the usual certifications, including certifications to ISO 9001, ISO 14001 and OHSAS 18001, and has received multiple awards for its work, including the China Print Awards, the Package Star Award and the Green Printing Special Award.

Koenig & Bauer: We print your world

Koenig & Bauer achieves revenue of more than 1bn in 2020