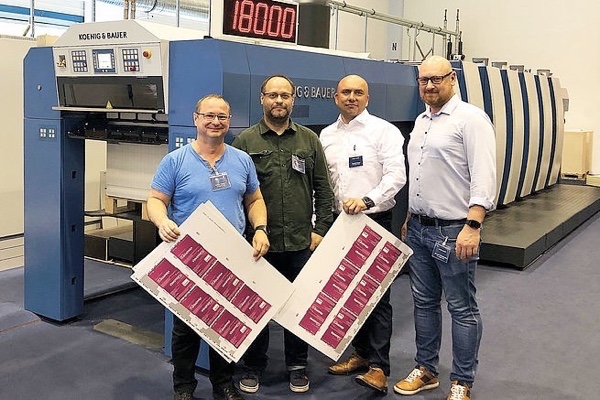 Friday 11. December 2020 - A new Rapida 76 is scheduled to go into production at August Faller in d, Poland, in the spring of next year. This half-format press with seven printing units and twin coaters is expected to boost annual carton packaging production by around 20 per cent to over one billion units.

The company is one of a total of seven locations belonging to Faller Packaging, a system supplier of healthcare and pharmaceuticals packaging with headquarters in the small town of Waldkirch in the south-west corner of Germany.
The printing facility in Łódź was founded in 2013 and – in the words of director Krzysztof Krupa – is an increasingly important division within the company group. “August Faller is a family business which began as a commercial printing workshop, later concentrated on the production of packaging and labels, and in the meantime specialises in products for the pharmaceuticals market,” says Krupa. “This has enabled the company to build up extensive production know-how in this particular market segment, and ensures that we are able to satisfy all regulatory requirements and customer expectations. Our standing within the group continues to grow. The best illustration of this is the investment in a new offset press. We expect to increase our production capacity to around 1 billion folding cartons per year, and then in further steps to as much as 1.4 billion.”
New press, increased production capacity
The Rapida 76 ordered by August Faller will be the first in a double-coater configuration on the Polish market. It is the first sheetfed offset press from Koenig & Bauer to be installed at the facility. Alongside equipment for UV production, it features numerous inline measuring and control systems (QualiTronic ColorControl, ErgoTronic ColorControl, QualiTronic QualityPass) as well as pile logistics systems allowing integration into the logistics line already in place in the print centre.
“We worked very closely with Koenig & Bauer to determine an ideal feature list. And these decisions were based on a series of expectations to be fulfilled by the new press,” Krzysztof Krupa explains. “We believe that we have chosen the best and fastest press in this format class. It will boost our productivity dramatically, and the quality of the pharmaceuticals packaging we produce will also be improved significantly. The seven printing units will enable us to work with a broader spectrum of colours, while the two coaters give us many more finishing options. That all adds up to a very future-proof solution. Another important point was the footprint of the press itself; even with its relatively large number of printing and finishing units, it is still a very compact press.”
All-round package from print tests to after-sales support
Krzysztof Krupa points out that it was not only the purely technical aspects, but also the after-sales service offered by Koenig & Bauer which convinced him. The print tests conducted on a press from the current series were nevertheless important. Krupa recalls bringing along some of his most difficult jobs. “But the Rapida 76 sailed through them without problems. We were also impressed by the numerous inline measuring and control systems, and by the possibility of integrating the press into our MIS network.”
“Our customers are particularly demanding. That starts with the questions of quality and punctual delivery, and extends to compliance with product-specific standards. The Rapida 76 meets such demands and expectations in every way.”
Comprehensive service for global brands
“Our facility is the group’s Eastern European bridgehead. We support the German headquarters in the processing of high-volume orders and can in this way secure maximum continuity in our production. Many very large orders from global customers are printed in parallel at the August Faller locations in Poland and Germany.”
Production capacity in Łódź has grown continuously. “The curve has pointed steeply upwards over the past few years,” says Krzysztof Krupa. “Our production output, which is spread over four half-format presses, increased from 630 to 850 million folding cartons per year between 2018 and 2020. And thanks to the investment in the Rapida press, we can now look forward to a further leap in productivity in 2021. We are certain that our customers will notice how we are supplying their products faster and more efficiently than ever before.”
Sylwester Piec, regional sales manager at Koenig & Bauer (CEE), is equally delighted: “August Faller is a good example of a print company which has discovered a market niche with high potential. The pharmaceuticals industry is very demanding and expects absolute quality, reliability and adherence to deadlines. In this context, it is a great success that we have been chosen to supply our Rapida 76. We hope that it will now contribute to further dynamic development at Faller Packaging’s Polish subsidiary and to the realisation of its ambitious plans to increase production.”

Oskar Görner thrives with a Rapida 106

Koenig & Bauer gears up for the future

All the signs point to growth!