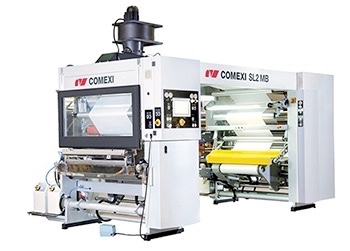 Monday 24. August 2020 - SCREEN GP Japan, Inc. has announced that the new entry-level non-solvent laminator SL2 MB, developed by Comexi Group Industries S.A.U. (headquartered in Spain), which has been under an exclusive distributorship agreement in Japan since September 2018, will be sold in Japan started this project in April.

In recent years, environmental measures in the manufacture of flexible packaging materials have been extended beyond the printing process to include base materials and laminating processes. In addition, the development of non-solvent adhesives for use in laminating is progressing and interest in non-solvent laminators is increasing. Against this backdrop, Kuraray is adding the SL2 MB to its lineup of non-solvent laminators that can also be used as a start-up model, in an effort to strengthen solutions for non-solvent lamination, for which demand is expected to grow in the future.
Although it is an entry-level model, the SL2 MB follows the 3 roller lamination NIP structure of the previous standard model. The SL2 MB is based on the same three-roller NIP structure as the previous standard model, which prevents curling of thin or stretchy film, provides excellent bubble-free finish and ensures uniform adhesion strength across the entire width of the film. In addition, the adoption of the unique XTRACT structure allows for quick roller changes during width changes to be completed in less than two minutes instead of the usual ten minutes or more. In addition, the rollers in the coating section can be driven independently, as in the case of higher-end models, which enables uniform formation of the adhesive layer, a wider range of coating amounts, and shorter cleaning times.
The higher-end model, the SL2 MP, is equipped with two large touch panels, allowing for integrated management with peripheral devices such as corona processors and gram sensors, as well as production management and analysis if cloud services are used. Depending on the operation, it can also be fitted with a turret system that allows for the automatic exchange of rewind and unwind.