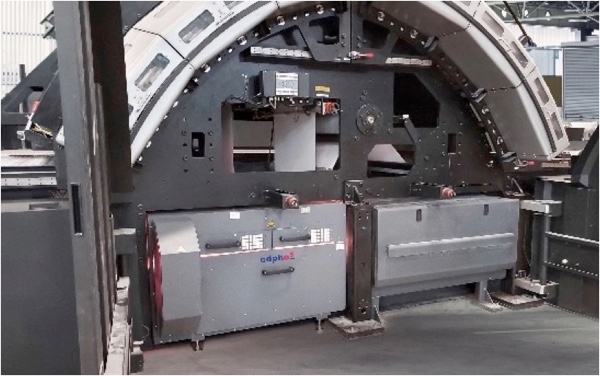 Friday 31. July 2020 - Upgrade kits for T200, T300, and T400 series inkjet presses enable printers to increase their printing speeds by up to 60% and finishing speeds by up to 100%. Dozens of HP T-presses of 20-, 30- and 40-inch printing width have been installed in the past decade. Many of these have been upgraded with adphos dryers for increased productivity. adphos was approached by numerous HP T-press users and asked whether an aNIR dryer could increase the drying capabilities, running speeds and ROI of their inkjet presses.

Adphos developed a series of solutions and successfully installed them on all width variations. The performance results are stunning, especially keeping in mind that retrofitting a T-series press is a fraction of the purchase of a second press.
When the analysts at Inkjet Insight heard of the performance gains, adphos and a leading print service provider in the USA agreed to jointly run a productivity study on a T400 series press with adphosNIR drying and compare it with a T400 series press with only HP OEM dryers. The HP T400 series is an industry leading colour high speed inkjet production printing press with a speed of up to 1000 fpm (305 m/min) production at a width of 41.7 inch (1060 mm). Both presses are installed at the same PSP location. One press was configured with three existing OEM drying modules and the second press was retrofitted with one adphosNIR module with the two remaining previously installed OEM drying modules.
The result of Inkjet Insight’s study is published as a whitepaper titled “Drying Matters – The Impact of Drying on Inkjet Performance”. Prior to the install of the new adphos drying equipment this customer’s press performance was limited due to the influences of higher coverage printing within the presses and inline finishing equipment.
• High coverage print jobs on matte or glossy stocks, the PSP’s HP T4X0 had been limited to 500fpm /152 m/min or less
• Wet ink entering finishing systems created jams reducing productivity and increased down time.
The following enhanced press performances using the aNIR drying have been achieved:
• The speed of high coverage sample job increased by 60%, from 500fpm 152 m/min to 800fpm / 244 m/min.
• The speed of the medium coverage job was increased by 33%, from 600fpm / 183 m/min to 800fpm / 244 m/min
• During testing on the aNIR equipped press, yellow rub off was greatly reduced both eliminating ink transfer when stacking on staging carts, as well as eliminating finishing jams caused by wet or tacky ink.
• On the aNIR equipped press, the stack height was significantly reduced increasing offline finishing speeds.
Additional to the productivity and quality-focus of this white paper it can be said that further advantages like reduced ink-consumption, CO2-free-drying, reduced energy consumption, no downtime for warm-up and no energy consumption during job-changes add to the positive balance of adphos aNIR solutions and allows an ROI within a matter of months. This powerful upgrade solution can boost any HP T200, 300 and 400 to increase productivity significantly at minimal investment.