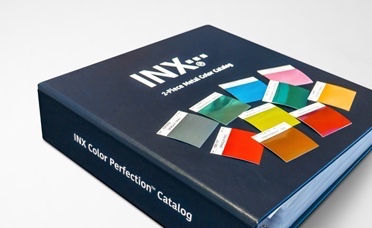 In less than a year, nearly 100 catalogs are now in the market. Brand owners have improved their efficiencies by reducing their lead times and getting can labels to the market quicker. This comes on the heels of news confirming increased competition in the marketplace. In 2017, overall beer volume sales slipped 1 percent but craft brewer sales volume rose 5 percent. This follows a 6.2 percent increase the prior year, and craft brewer sales now account for 12.7 percent of the total U.S. beer market.
“We are impressed that brand owners recognized what the INX Color Catalog could do for them. We think others will continue the trend after they’ve had a chance to learn more about it at this year’s show,” said Renee Schouten, INX Director of Marketing, who has received a favorable amount of feedback from craft brewers.
“Oceania Eagen at BlindTiger used it for their Bale Breaker cans, and said they used INX swatches and ran pilots through two print vendors,” continued Schouten. “She liked being able to have consistent ink call outs to both vendors so they had true, apples-to-apples comparisons. She also noted witnessing consistency with color output in comparison to paper matches that never were quite right.”

The INX 2-Piece Color Catalog is an essential part of the INX Color Perfection program, which eliminates the guesswork behind designing and selecting color for beverage cans. The catalog itself contains over 600 removable color swatches. They are printed on metal – not paper – to help accurately specify and achieve reproducible and consistent color.
Using INX Color Perfection, users save time in the design files prior to the pilot program or in the production stages with the color catalog and corresponding Digitized Color Library. This also improves the communication channels throughout the marketplace, says Schouten.
“It helps everyone in the supply chain have a better understanding of what customers want. I encourage all who are attending this year’s show to visit our booth so they can learn more first hand. We will have experts available to answer each and every question craft brewers have for us.”

For INX Digital, its all about the inks at final SGIA Expo