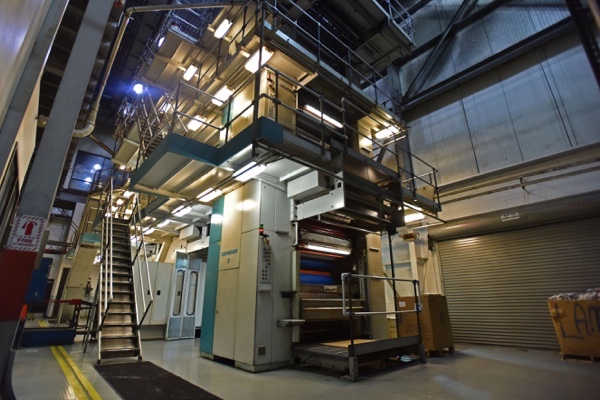 U.S. media company Civitas Media has chosen QIPC – EAE Americas to modernise the press controls at its newspaper print shop in Wilkes-Barre, Pennsylvania. In the future, yet another new QIPC – EAE Americas customer will reap the benefits of innovative EAE control technology.

Civitas Media, headquartered in Davidson, North Carolina, is a dynamic, multi-channel, local information company with strong roots in traditional community newspaper publishing, producing more than a hundred different titles across twelve states. The facility in Wilkes-Barre is responsible for the Times Leader, the primary daily newspaper for the entire Wyoming Valley area, as well as a number of other regional publications including a weekly entertainment guide Weekender and a substantial commercial portfolio. They are printed on a manroland Geoman web press with five reel stands, three four-high towers, and a folder. It went into operation in 1996, making it the first press of this type anywhere in the U.S. The retrofit order now placed with QIPC – EAE Americas includes the replacement of the existing PECOM system with an EAE solution and the installation of state-of-the-art control consoles.

Detailed analysis in preparation for the retrofit
The new retrofit project was launched as the outcome of detailed, intensive studies. The fundamental question confronting Civitas Media was whether it actually made economic and technical sense to maintain their own production facilities in Wilkes-Barre. The answer was an emphatic ‘yes’, and since it could be assumed that the press would continue to deliver high quality newspaper products with very low waste in the future, the decision to have it upgraded and modernized was a logical step.

“We’re obviously aware of the strengths and weaknesses of our press, and we’d known for a while that replacing the existing press controls would be a wise move. However, recent and ever-increasing malfunctions made dealing with all of this a high priority,” says Peter Fleming, Regional Director of Operations at Civitas Media. When asked why the retrofit order was awarded to QIPC – EAE Americas, he replies: “QIPC – EAE were recommended to us by Jim Gore of Pressline Services, a well-respected industry source. He was using them to engineer their Boston Globe relocation project – a massive undertaking. I spoke to the QIPC – EAE engineers there and was able to get some ‘hands-on’ time with their consoles to get an idea of the system capabilities. It was a most impressive visit. Later I toured EAE’s production site and had extensive, detailed meetings with their management, design engineers, and technicians. I also visited several newspaper production facilities that housed manroland presses and was able to interact with peers in order to gain their perspectives. One of these sites was even undergoing a retrofit at the time I was there, so it was possible to judge for myself the quality of the workmanship involved. The combination of these experiences gave us the confidence to propose QIPC – EAE as our best choice for the project.”

Migration to modern control consoles and press controls
The upcoming retrofit will comprise the installation of two EAE Baltic Star control consoles, EAE IPC controls for the printing units and the folder, and various PCs for remote maintenance, network communications, and section control. The press will also be equipped with an EAE Info reporting and logging system as well as an EAE Print production planning and preset system. The Interbus network (wiring and hardware modules) for one of the three towers will also be replaced at the same time.

Mr. Fleming describes what he and his team at the newspaper production facility expect from the retrofit: “Top of the list is definitely reliability. Aside from that, we’re also anticipating a supportable platform, a more user friendly setup, greatly improved and friendlier support, and – last but not least – better and much more detailed diagnostic functions, which happen to be the key to the operation of this press.”

Ronald Reedijk, Managing Director of QIPC – EAE Americas, comments: “We’re delighted that Civitas Media have trusted us with this project. Retrofitting third-party systems is always an exciting challenge. I firmly believe that, with our rich experience in this field and our innovative and powerful systems, we’re optimally placed to implement a solution within a very short time that keeps newspaper production at the Wilkes-Barre site running smoothly and economically with a consistently high level of quality.”

The on-site retrofit work is due to be executed in the first quarter of 2017. Peter Fleming is ready and eager: “Sometimes I get handed project management jobs that I really look forward to, and this is certainly one of them.”