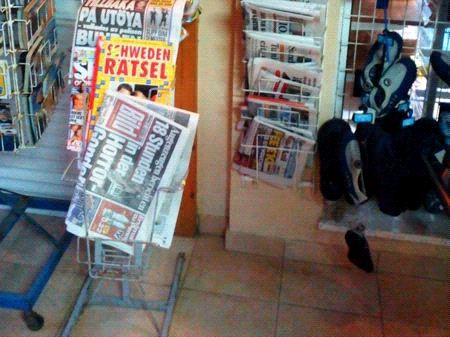 Non de-inkable newspaper prints at a hotel in Cyprus

Rather than shipping them around the world, more and more especially foreign newspapers are printed decentralised with dye-based aqueous inkjet – starting on islands, now also in Rome and Berlin. These newspapers are not suitable for the production of new bright, graphic paper: In the deinking process*, the soluble colours bleed and stain other paper fibres. Just before the IPEX 2014 fair in London, for the first time a web-fed aqueous inkjet printing system has delivered good deinkable printed products. Test prints from KBA’s high-performant RotaJET on uncoated newsprint paper have shown good deinkability in lab tests arranged by INGEDE.
Four years ago, Xerox’s solid ink technology has been presented at IPEX which is currently the only one already in the market that without applying costly pre-coating materials to the paper receives “good” deinkability according to the ERPC Deinkability Scores**. The highest possible rating “good deinkable” is also achieved by prints from Fujifilm’s Jet Press 720, a B2 sheet-fed digital inkjet press, using coated paper with an inline pre-treatment. This printer had also been presented at the last IPEX.
The RotaJET inkjet technology works with a polymer pigment ink, where the polymer stops the jettable fine pigments from bleeding into the fibres, collects them, and thus improves both brilliance and removability. An optional “Control Fluid” improves the deinkability even further.
Constant Improvement, Result of a Consistent Dialogue
Already before drupa 2008 INGEDE had pointed at problems in recycling the prevalent inkjet prints. While dry toner prints are generally good deinkable, with inkjet prints this worked only on a few special papers. “A comparably small amount of prints with water soluble dyes or pigments can make a whole load of paper useless for the production of new graphic paper”, explains Axel Fischer, chemist and INGEDE’s expert for recycling digital prints. “The recent developments are a nice acknowledgement for the consistent dialogue of the paper industry with the digital printer manufacturers which we lead for a couple of years now. They also show that it is actually possible to design inkjet prints in a way that they work well in the existing system of paper recycling. For the future, we can expect more positive development in this sector.”
With all three systems, good deinkability goes hand in hand with better image quality – these inks tend to less bleeding and less strike through.
INGEDE is an association of leading European paper manufacturers founded in 1989. INGEDE aims at promoting utilisation of graphic paper for recycling (newsprint, magazines and office paper) and improving the conditions for an extended use of paper for recycling for the production of graphic and hygiene papers.
* Deinking is the removal of printing ink during the paper recycling process.
** ERPC is the European Recovered Paper Council. The “Deinkability Score” system is available from the ERPC web site www.paperrecovery.org

DPDA-INGEDE Letter of Intent: Collaboration on Deinkability of Inkjet Prints